The decade of violence conflict in the northeast region of Nigeria occasioned by climate change impact as well as the Boko Haram insurgency, has resulted in loss of lives, properties, means of livelihoods as well as general displacement among the citizens of the Sahel region. Ecological factors as a fundamental cause of displacement has resulted to severe pressure being placed on available resources such as trees in the bushes/forest, water bodies, lands etc thereby making lives unbearable for displaced persons across the region. 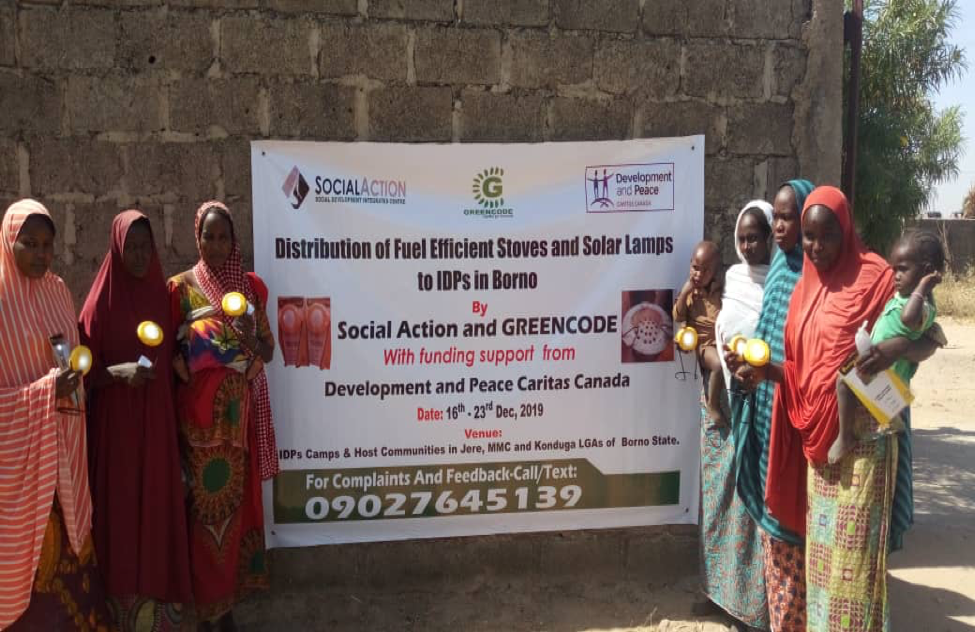 Access to energy is one of the major issues confronting millions of the displaced persons in IDPs camps across the northeast Nigeria. Based on an earlier commissioned Needs Assessment study carried out by Social Action and partners, household energy needs of displaced persons in camps both formal, informal and diffused are those associated with cooking, heating and lighting. Due limited resources such as wood and other alternative sources of energy, displaced persons faced the challenge of survival, threat to their existence and exposure to other security threats. In an effort to address these immediate challenges of the displaced persons, social action in September 2019 commenced the implementation of a multi-sectoral project in Borno which aimed at improving access to energy to the most vulnerable households with specific focus on distribution of efficiency cooking stoves and provision of solar lamps. The overall goal of the project was to contribute to human survival and the reduction of suffering via the provision of strategic, specific focused interventions programmes on livelihood and early recovery and energy access among internally displaced persons in informal camps and diffused communities in Borno state. 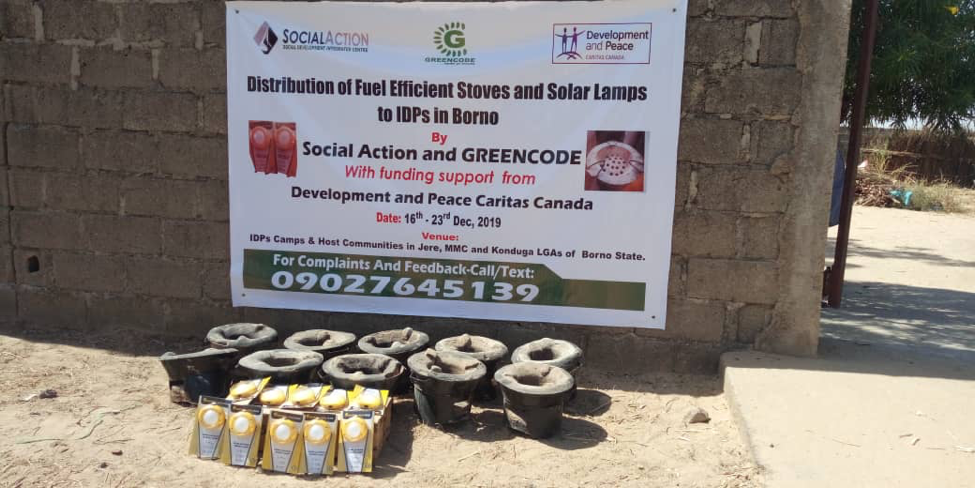 To achieve the goal of this exercises, Social Action and partner in December 2019 embarked on preliminary activities of identifying, selecting and mobilizing beneficiaries of the intervention across three local government areas of Borno state which included Konduga, Jere and Maiduguri Metropolitan City (MMC). Over a period of one week, the project team took a tour of the nine communities across the three local government areas to mobilize stakeholders necessary for the implementation of the project. This included several meetings with community heads, IDPs representatives, women and youth groups as well as some security agents in those locations thereby creating opportunity to provide detailed information on the project goals and target as well as solicit for community support and buy-in. The tour to IDP communities and camps was also to identify possible volunteers who will be trained as human rights ambassadors to monitor and report on issues of human rights abuses in IDP camps.

Based on the outcome of the preliminary activities, on 12th of December, Social Action and Greencode embarked on the registration of beneficiaries and distribution of efficiency cooking stoves and the solar lamps in line with a joint agreement with the community structures on the beneficiaries’ selection criteria A total of 80 households were registered and documented. Beneficiaries included Persons living with disability, or household with persons living with disability, Pregnant and lactating mothers, Household with large number of children under 5 years, Child or Female headed households and households that sleep without any form of lighting at night.  Between 16th and 20th of December, a total of 70 households from six communities across the 3 LGAs received/benefited from the distribution of the Fuelwood Efficient Cook Stoves (FES) and 60 solar lamps. Distribution is other areas are still ongoing.