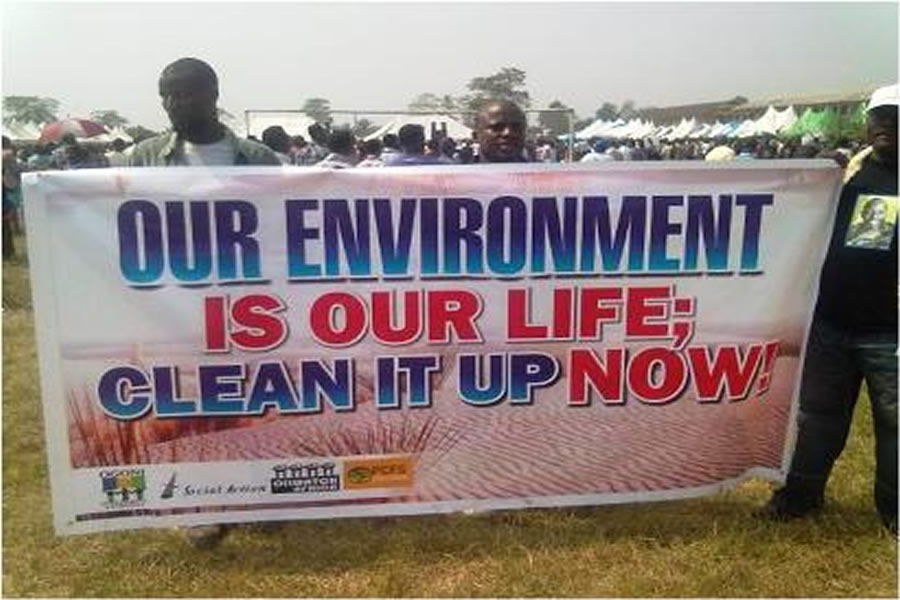 A CROSS SECTION OF OGONI PEOPLE AT THE BORI EVENT

The annual event, which brings together sons and daughters of the Area to take stock and deliberate on important issues concerning their well being.

This year’s event featured centrally on the UNEP report on Ogoni issued by the United Nations Environmental Program in 2011 and yet to be implemented by the Nigerian government. It also deliberated on the land seizures by the Rivers State government as well as the clandestine moves/attempts by Shell to re-enter the area for oil exploration.

Addressing the media at the venue of the event, Celestine Akpobari, Convener of the Ogoni Solidarity Forum, OSF stated that Ogoniland was in a worse situation and environment today than compared with the days of Ken SaroWiwa. According to him, “it is sad that the polluters of Ogoni environment (Shell and Nigeria National Petroleum Corporation) are still thinking of how to implement UNEP death sentence on Ogoni environment and people, 15 months after the report was presented to the President of Nigeria, Dr Goodluck Jonathan”.

He said that “all the Government and Shell think about is how to restart oil production in Ogoni and nothing on the clean-up of its mess which has brought untold hardship, death, strange ailments and disease on the people”.

One of the several cultural dance groups at the 20thOgoniDay Celebration in Ogoni.

Ogoni Women at the event

It will be recalled that it was at this day’s maiden edition that the late Environmental Rights Campaigner, Ken SaroWiwa, then Spokesman for Ogoni people, mandated by the Ogonis declared Shell Petroleum Development Company, SPDC a persona non grata in Ogoni land for the unprecedented devastation of the Ogoni environment.

Several Ogonis spoke at the occasion on the issues facing them as a people and possible ways of bringing about improvements in the well being and living standard of the people.

At the end of the deliberations, the following resolutions were adopted;

1) That the Federal Government of Nigeria and Shell should commence immediate decommissioning and clean up of their polluted environment in line with recommendations of UNEP Report on Ogoniand stop paying lip service to a matter that affects their well being and livelihood;

2) That the Rivers State government should withdraw soldiers from Ogoni communities immediately;

3) That an independent probe panel be set up to investigate the killings of innocent people at Sogho and the destruction of about 50 houses in ZorSogho;

4) That the Rivers State government should stop ongoing midnight raids of Ogoni communities and arrest of all those resisting land grab in the area;

5) That all those arrested and detained in connection with land grab campaigns, be released with immediate effect;