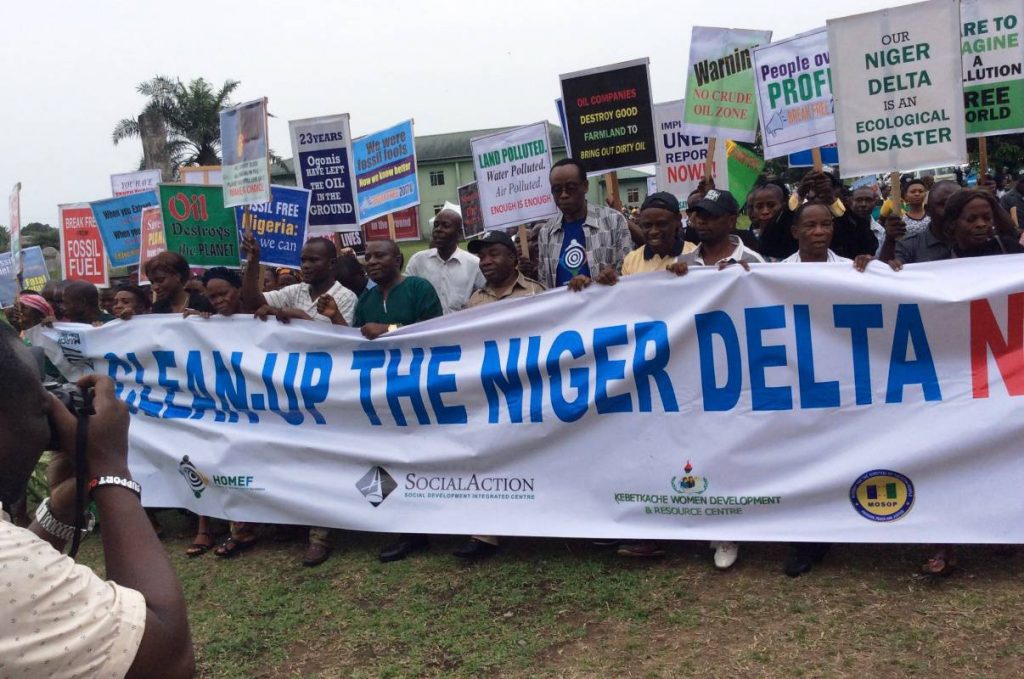 Mass #Breakfree Actions in Ogoni, Nigeria. On the 30th of March 2017, hundreds of climate activists, as well as concerned and affected Nigerians, joined ongoing actions around the world aimed at pressing home the need to address our dependence on fossil fuels which poisons our planet and threatens to eliminate all of us. This problem is even more pungent in Nigeria where the effects of fossil fuel-related pollution and climate changes are emerging as major disasters. From sea level rises that threaten to consume whole coastal lying communities to crude oil pollutions which continue to deprive many of viable livelihoods, the continued extraction and dependence on fossil fuels has devastating consequences for Nigeria and especially the Niger Delta.Recently the city of Port Harcourt and its environs has been plagued with heavy soot pollution, an outcome of incomplete hydrocarbon combustion processes. For months, the people have had to breathe this poison while interacting with it on their skin, clothes and food items. The immediate and long-term medical consequences of this will be severe. While the government at the federal and state level have failed to arrest this problem, or even confirm the source of this new threat, the people of the Niger Delta continue to live with routine gas flaring and unmitigated oil spills while oil companies and government officials trade blame and the situation persists.
Rather than improve the lot of the people, oil and gas extraction has been the source of conflict, livelihood losses, social imbalance, environmental pollution and health threats. Indeed, due to soil air and water pollution which the people of the Niger Delta region are exposed to, life expectancy has dropped in the region. Despite several decades of oil extraction, Nigeria still fares miserably on all development indices, in many case, worse than other less endowed countries. On all key global development indicators, Nigeria fares badly; it has one of the lowest electricity access in the world despite its huge crude and gas deposits, failing infrastructures, failing healthcare, failing educational systems, etc. It begs the question to ask, what has been the benefit of Nigeria’s fossil fuels?
According to report by the United Nations Environment Programme UNEP, released after an assessment of environmental pollution in Ogoniland, the area has been so polluted that it might take up to 30 years of clean-up and remediation activities to bring it back to its pre- crude oil condition. Indeed, benzene, a chemical which causes cancer and other heart-related diseases is contained in the water the people drink, 900 times above safe levels.
Crude oil extraction and its attendant environmental and social problems continue not for lack of alternative, but because the government has refused to explore other cleaner, cheaper and viable energy sources. Other countries are gradually moving away from fossil fuel as a source of energy, while Nigeria is increasingly embedding itself in petroleum extraction.
It is this spirit of the need to stop the extraction of fossil fuel and begin the exploration of other cleaner and renewable sources of energy that informs the Break Free from Fossil Fuels movement. Break Free from Fossil Fuels is a wave of escalated citizen-led actions to keep coal, oil and gas in the ground. Comrade Legborsi Saro Pyagbara, President of MOSOP, sees the action as timely. “Coming at this time, the Break Free action is an opportunity for us all to remind the Nigerian state that the clean-up of Ogoni environment should be seen as a step towards our turning away completely from dependence on polluting or dirty energy sources.
According to a key organizer of the Break Free movement and Director of Health of Mother Earth Foundation (HOMEF) Nnimmo Bassey, “The time has come to make fossil fuels history and give our environment and peoples a chance to recover from decades of unrelenting oil pollution. By our actions we are standing in solidarity with communities in the oilfields of the Niger Delta, and other impacted communities around the world, demanding that our appetite for dirty energy must not be allowed to destroy the planet and future generations”.
Celestine Akpobari of the Ogoni Solidarity Forum says “If there are still people who doubt the devastating effect of the fossil fuel business on the environment, citizens’ livelihoods, well-being and their very life, the terrible experience of Ogoni, tells it all. If the Ogoni people had a second chance, they would choose their environment over crude oil. They will prefer to keep their sons and daughters including Ken Saro-Wiwa and thousands of others who became victims of this deadly business. Breaking free from fossil fuel will save the world from having another Ogoni.”
According to Ken Henshaw of Social Action and a member of Nigeria organizing team of the Break Free campaign, “this global campaign is the type of citizens’ led shock therapy that is needed to make the world realize that our dependence on fossils is destroying our only habitable world. Fossil fuels may seem attractive, and something we cannot do without, but so did stone seem just before mankind moved away from the Stone Age; so did typewriters before we moved over to computers. A global dependence on fossil fuel is simply no longer sustainable, especially in the face of increasing threats to global existence on the one hand, and the availability of viable, safer and more sustainable alternatives”.
The #Breakfree from fossil fuel event took place at the Ken Saro Wiwa Peace and Freedom Centre in Bori, in Ogoniland.
For more information contact:
Ken Henshaw (Social Action)– henshaw@saction.org ; 08034053707
Legborsi Saro Pyagbara, (MOSOP) 08033392530
Nnimmo Bassey (HOMEF)- nnimmo@homef.org ; 08037274395
Celestine Akpobari (Peoples Advancement Centre) – ogoniadvancement@yahoo.com ; 08032733965
Emem Okon (Kabetkache) – emembridget@yahoo.com ; 08033363172