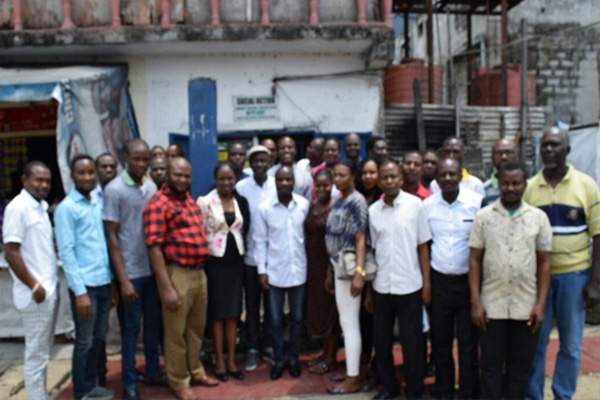 As an outcome of Social Action’s Popular Education work during the past decade, the activist members of the local Civil Rights Councils have been meeting to consolidate on a common mission of defending human rights and promoting alternatives to social systems that encourage repression and economic exclusion. So far local Civil Rights Councils have been created in Diobu (Port Harcourt), Bori (Ogoniland), Ekpan (Warri), Calabar, Owerri, Enugu and Abuja.

In support of the mission of the Councils, the Director of Social Action, Isaac ‘Asume’ Osuoka met with some of the local groups in the first quarter of 2018. In a meeting with members of the Diobu Civil Rights Council in February 2018, the Social Action Director stressed the need for a concerted action towards consolidating the Civil Rights Council initiative as a strong community-based and self-driven platform for direct interventions to protect the rights of citizens in the localities. He supported the objective of the organisation to advance human rights documentation and advocacy, community mobilisation and political education.

In Diobu, Asume Osuoka recounted the perilous state of the nation and the continuous slide of socio-economic conditions manifesting in bad politics, human right abuses and the crisis of leadership in Nigeria. He maintained that the only way out of the problem was for the citizens to mobilise to participate in the political process and try to hold public officials accountable. He added that failed attempts in the past at setting up viable social movements should not be a discouragement; instead, the successes recorded in the face of challenges should serve as an encouragement for a further attempt to create a peoples-based mass movement. He maintained that this is possible if only the citizens should come together under social groups, pull their resources together to make their voices heard, and one way to do this is to organise themselves under community based human right groups. The Director promised that Social Action would offer any relevant assistance to the various community units of the Civil Rights Council as may be necessary to ensure that the groups are effectively mobilised for constructive engagement and intervention in the political system and to defend human rights.

Social Action’s resolve to encourage the Civil Rights Council has been part of the policy to transform its Popular Education Centers into more functional and participatory instruments for resolving social and political problems in our society, especially the recurrent issues of human right abuses. Each unit of the Council tackle their community human rights issues, seek engagement with state actors on matters of state policy but work in close collaboration with the other units with the support of Social Action.

Representatives from all the local units of the Civil Rights Councils participated in Social Action’s annual Popular Education Camp in late 2017. The activists used the opportunity of the Camp to brainstorm on their experiences and activities in the various communities and the best possible means to enhance effectiveness. Following the Camp, the Programme Officer, Political Education of Social Action, Arochukwu Ogbonna visited the various units of the Councils as part of measures to encourage the expansion of activities and membership.