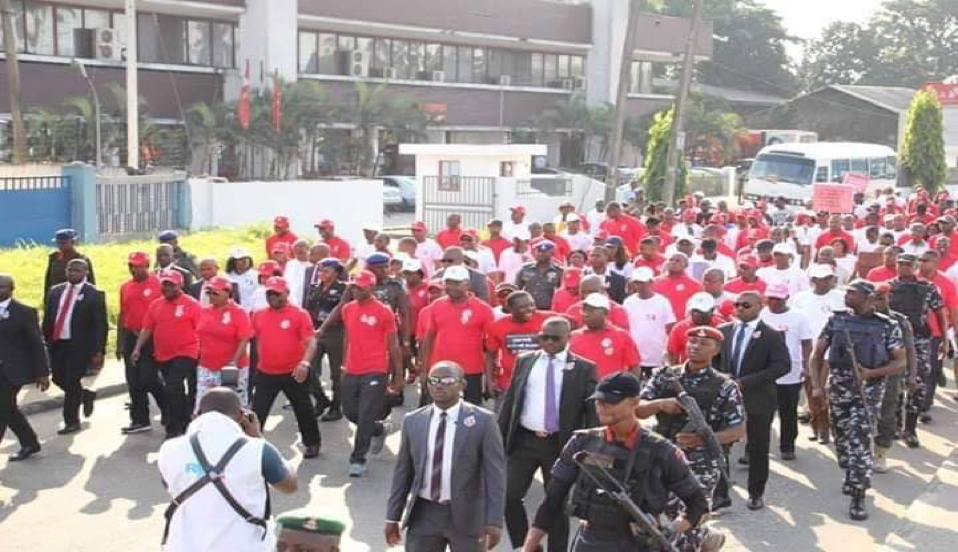 The 9th of December was declared by the United Nation as the International Anticorruption Day to draw attention to and create awareness on the dangers of corruption to the development of any people. Since United Nations Convention Against Corruption passage on 31 October 2003, the day been observed by government and non-governmental organisations, the civil society, pressure groups and communities the world over.

Social Action, like many other civil society groups in Nigeria has been observing the day in line with the spirit and intentions of the United Nations declarations. Consequently, activities for 2019 have been organised to draw attention of the governments and her agencies on the need to curb corruption, promote accountability and prosecute those found involved in corrupt practices as a deterrent to those who would want to tow the ignoble line. The citizens are also sensitized on the need to shun corruption and to report cases of corruption to the anti-graft agencies. The activities lined up for 2019 Anticorruption Day include radio sensitization program, press briefing, symposium and anti-corruption rally.

Ahead of the international anti-corruption day 2019, the Rivers Anti-corruption Network organised a press briefing on the recent activities and outcomes of actions the network has carried out so far in the form of advocacies, engagements and campaigns on the issues of corruption in the state in the past months. 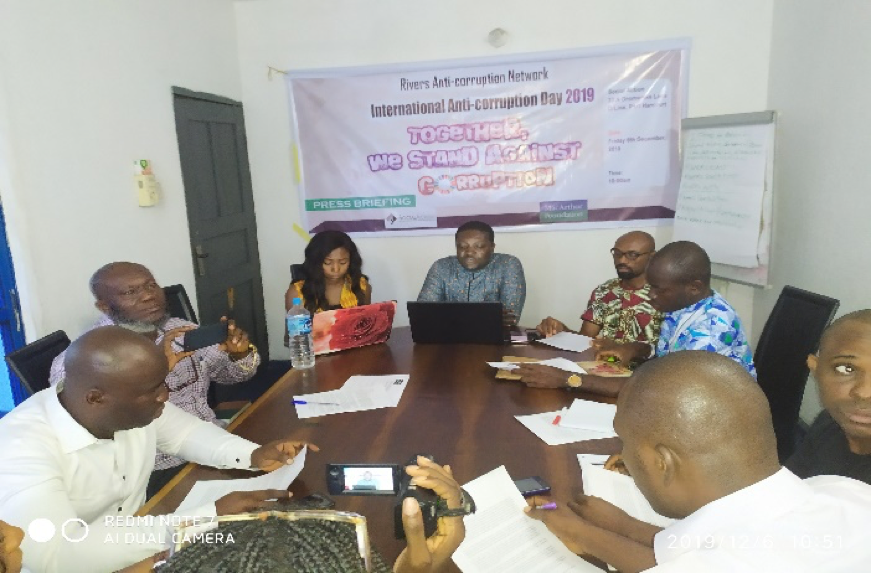 The press briefing took place at the Head Office of Social Action in Port Harcourt on the 6th of December 2019. It was used to inform the general public and citizens on the efforts the Network has put in to get documents pertaining to the award of contracts from government institutions in Rivers State placed with the responsibility to do so and how those efforts have been in futility. In a statement read by Comrade Green Isaac, requests were made to the office of the Accountant General of the state for the Accountant General’s Report for the year ended 2018. Requests were also made to the office of the Auditor General, for the Auditor General’s Report of 2018 fiscal year as ended and the Bureau of Public Procurement in Port Harcourt for details of the contract awarded in the state for 2018. Unfortunately, none of these requests was responded to by the respective agencies.

In her statement,  the Network made salient demands on the government and anti-graft agencies as follows;

At the end of the briefing, questions were asked by the media persons and civil society groups present while members of the Network provided answers. The Rivers Anticorruption Network is constituted by concerned Civil Society Organisations, the Civil Right Council, Community Based Organisations and the Media and coordinated by Social Action

The 2019 Anti-corruption day rally was a collaborative street walk against corruption between the Economic and Financial Crimes Commission, Nigeria Shippers council, Nigeria Immigration Service, Nigeria Correctional Service, Nigeria Police, the Rivers Anti-corruption, coalition of Civil Society organisations and convened by Social Action and host of others in the maritime sector. The rally which took place on the 9th of December 2019, started from the EFCC office at No 6 Olumeni street, old GRA Port Harcourt to Mile 1 Diobu, transiting through Ikwerre Road and returned back to old GRA.

The walk which was well attended by state and non-state actors also had in attendance the Governor of Rivers State Governor Nyesom E. Wike CON, and his cabinet members from the government house.

The governor while addressing the gathering said corruption has been the major problem of the Nigerian State and it has been the factor hindering development in the country. He gave the commitment of the State Government’s readiness to support the EFCC and other anti-graft agencies in the fight against corruption. However, he said that the state government’s support can only come if the anti-graft agencies fight corruption within the ambit of the law and not by a selective execution.

In his address, the Head of the EFCC Zonal Office in Port Harcourt Abdulrasheed Bawa, commended the Rivers State government for gracing the occasion with their presence. He recounted the successes of the Commission in her anti-graft campaign in taking down and convicting corrupt government officials. He gave the recent instance of the case of a former Governor of Abia State, Orji Uzor Kalu, who was convicted of corruptly enriching himself in government and sentenced to a 12-year imprisonment. The Zonal Head emphasised that the commission is law abiding and ready to follow the due process of the law, within the laid down rules of its mandate in fighting corruption.

On behalf of the Rivers Anti-Corruption Network and Civil Society, Comrade Green Isaac, said that corruption has eaten deep into every facet of the society and therefore needs the concerted effort of all citizens, governments and their agencies in the fight against the menace if there is any hope to make any appreciable impact. He regretted that over 2.5 trillion dollars is wasted every year on corruption- an amount ten times higher than that meant for development. He informed the gathering that the Network has been following trends of corruption cases and solicited the support of all stakeholder to ensure corruption is reduced to its barest minimum in the state. He advised contractors handling projects in the state to do execute them within the specified time frame and to ensure quality service delivery with the understanding that there is a third eye watching, which is the civil society.

Green concluded his address by lauding the state governor and his cabinet for partaking in the anti-corruption walk, noting that it was the beginning of good thing to come in the fight against corruption.