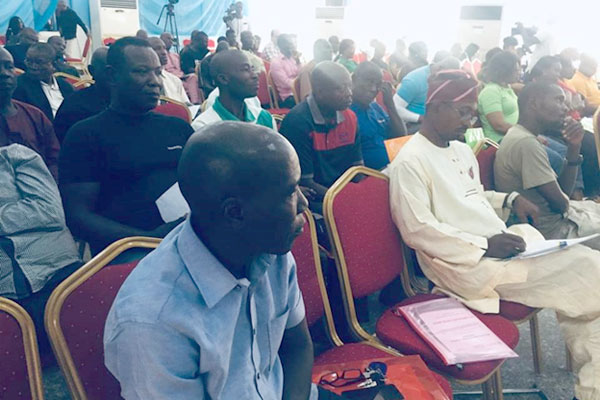 As part of the conscious effort to build a Nigerian nation that works for all its citizens, Social Development Integrated Centre (Social Action) in collaboration with Africa Centre for Information and Media Literacy (AFRICMIL) and the Civil Society Legislative Advocacy Centre (CISLAC) convened a conference of democracy activists to examine the state of the pro-democracy movement since the 1990s. The conference that brought together veterans of the pro-democracy movement and younger activists served as a platform for inter-generational dialogue on the movement for democracy and social change in Nigeria and the state of the nation. The Conference which held at the National Press Centre, Abuja on 13th of December, 2018 had in attendance renowned human rights and pro-democracy activists, civil society groups, former student union leaders, academia, development experts, labour leaders, the media and members of the public.While addressing participants at the conference, the Executive Director of Social Action, Dr Isaac Osuoka noted that twenty years of civil rule in Nigeria has seen the social condition of the Nigerian people worsened when compared to the military regime. He further noted that rather than the political class facilitating the wellbeing of citizens, they have continued to undermine the potential of the individuals and groups within the country. The scandalous wealth stolen by some members of the political class resulted in the dilapidation of existing infrastructures, collapse of industry and other economic development indices as well as human development, he said. Dr Osuoka then urged participants to leverage on the objective of the dialogue to push for an informed change in the democratic system of the country for the benefit of Nigerians, now and in the future.
In his remarks, Auwal Ibrahim Musa (Rafsanjani) of CISLAC noted that in the fight for democracy, a lot of Nigerians had been martyred for the cause. He said it is regrettable that a circle of politicians are doubling efforts to frustrate the struggles of pro-democracy advocates; thus activists need to double efforts to protect Nigeria’s democracy.
Conference chair, Y.Z. Yau acknowledged the relevance of the dialogue and termed it a proactive measure in the bid to restore sanity in the Nigerian democratic society. He stressed the need to write the story of the struggle to reflect engagements for democracy in the country – without which lessons would not be learnt and progress achieved.
In his keynote presentation, Dr Chidi Odinkalu emphasised the need for citizens to defend the public space and work for a society where power and authority coexist to engender a better democratic Nigeria. He decried the lack of youth involvement in the struggle for a better Nigeria; noting that the exit of activists from the political sphere after the end of the military rule has led to the infiltration of the polity by corrupt elements as we currently have. Dr Odinkalu concluded that Nigerians have the duty to sow hope and see the big picture by working together in actualising the vision of a better Nigeria.
Technical sessions focused on “Examining Multi-Party Democracy: Pitfalls and Opportunities” and “The Pro-Democracy Movement and Civil Society. Panellists included Owei Lakenfa, Jaye Gaskia, Chima Williams, Naseer Kura, Dr Sam Amadi, Dr Anthony Kola-Olusanya, Dr Odion Sylvester-Akhaine, Dr Sofiri Peterside, Chiemeke Onyeisi and Denja Yakub.
The conference further emphasised the need to understand the changing context of the struggle for democracy and the need to create new movements and tools for future struggle.
The dialogue ended on a positive note as participants gave affirmative reaction to the increasing engagement with partner CSOs in the bid to promote an inclusive democratic system in Nigeria. 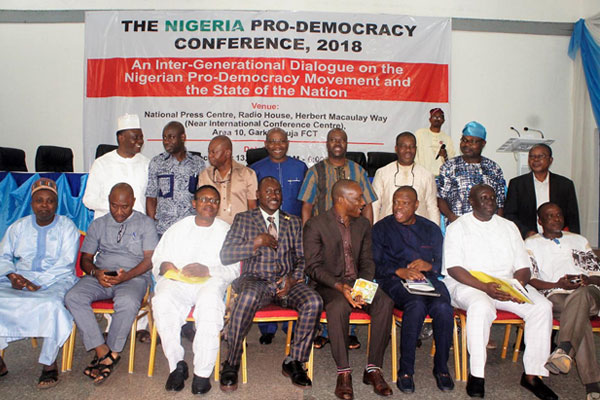 Panellists and participants at the Nigerian Pro-Democracy Conference, 2018