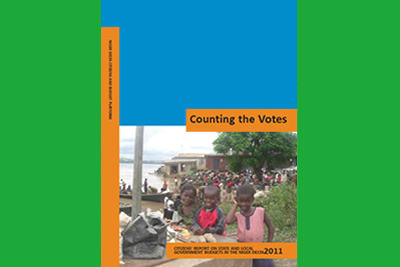 ‘Counting the Votes: Citizens Report on State and Local Government Budgets in the Niger Delta,  2011’ is the fourth  in a series of budget advocacy reports by the Niger Delta Citizens and Budget Platform (NDCBP). The volume presents an analysis of the 2011 budgets of the governments of Akwa Ibom, Bayelsa, Delta, Edo and Rivers States, as well as an independent assessment of budget implementation during the year. In the analyses, the income and expenditure preferences of these state governments were examined against their income generation, policy priorities, compliance with fiscal discipline and transparency mechanisms as well as their overall responses to development challenges.  In both the budget analysis and monitoring processes, special emphasis was placed on the education and health sectors. The level of transparency in the budget process, which could be assessed in part by the level of access which citizens have with respect to budget documents, and the opportunities for public participation in the budget making and implementation processes, also informs the conclusions herein presented. Read full report