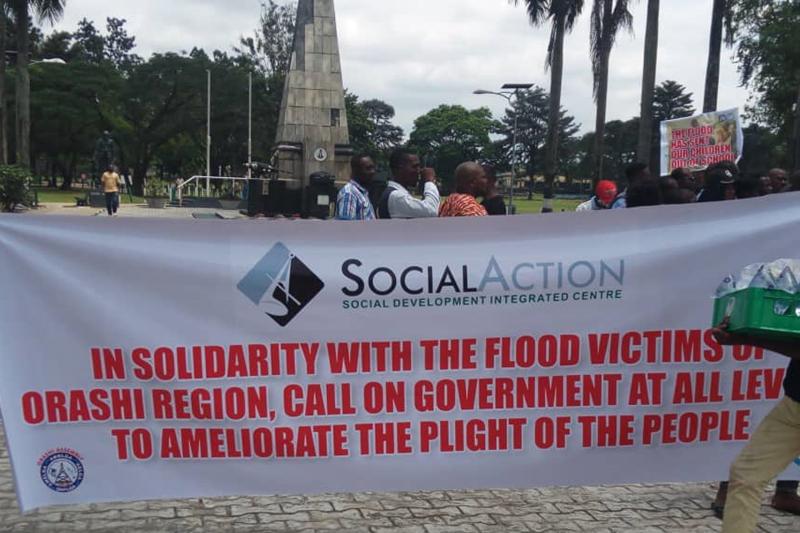 On Monday, 29 October 2018, victims of severe flooding in Rivers State, with the support of Social Action and other civic groups, rallied in Port Harcourt to protest the abysmal response by the federal, state and local governments to the plight of communities inundated since September 2018. Communities in states like Rivers and Bayelsa are among the worst affected by the 2018 floods, which has affected almost two million Nigerians, according to the National Emergency Management Agency (NEMA).

In Rivers State, communities along the Orashi River have been severely affected since the river, and other streams overflowed into the communities following continuous heavy rainfall from July 2018. Even though there were early forecasts of the rains and potentials of flooding, all tiers of government have failed to support the victims. With homes and hospitals inundated for weeks and crops destroyed, the unbearable situation led the displaced persons to plead with the Government of Rivers State government to come to their aid. After weeks without government response, they resolved to march into Port Harcourt, the capital city of Rivers State and centre of Nigeria’s petroleum industry.

Women with empty cooking pots on their heads marched with other protesters and declared their intention to occupy the Government House in Port Harcourt, the official residence of the governor of Rivers State.

The flood victims from Abua/Odual and Ahoada East Local Government Areas told reporters that there are no Internally Displaced Persons (IDP) camps in the two areas. With houses submerged and crops destroyed, displaced persons are left to their fate without food, shelter, drinking water and other essentials. They fear the outbreak of disease as sanitation is lacking in the affected areas. The flood victims pleaded with the three tiers of government to provide relief materials to cushion their plight.

The Rally, however, met resistance from the police whose men refused them to have access the Azikiwe Road leading to the Rivers State Government House.

The governor on hearing about the refusal of the displaced persons to leave stopped on his way to a function and instead of pleading with the people, he verbally insulted them, calling them agents of opposition politicians. The governor threatened that he would cancel all plans he had made to visit affected areas as a result of the protest.

In October, after six weeks of continuous flooding, the federal government visited some of the affected states through the Vice President, Prof. Yomi Osinbanjo, who made promises to ameliorate the condition of the flood victims. Those promises did not yield any results, as the people still await responses from their governments.