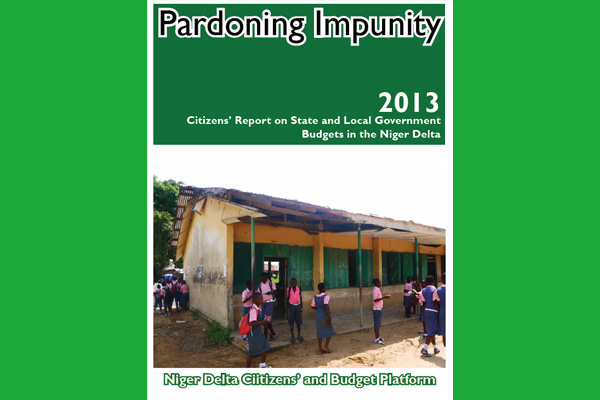 2013 witnessed economic downturns and political upheavals for Nigeria. From declining crude oil revenues, to being ranked the worst place for a child to be born; Nigeria fared badly on major global indices. Neither did the welfare of Nigerians improve in 2013. With life expectancy placed at 52 years and 68% of the population existing on less than $1.25 a day, Nigeria ranked behind African countries like Angola, Burundi, the Democratic Republic of Congo, Ethiopia, Liberia, Mali, Mozambique, Niger, Rwanda, Sierra Leone and Tanzania.

Pardoning Impunity is a product of yearlong field evaluation of performance, budget reviews and interviews with local residents and relevant government officials in 4 of the richest states of the Niger Delta- Akwa Ibom, Bayelsa Delta, Edo and Rivers states. The study analyzes the relation between the 2013 budgets of the states and their policy commitments. It appraises randomly selected projects in the key sectors of Education, Health and Food Sufficiency. The findings are insightful and reveal why development still eludes the majority of Nigerians. Read Full Report