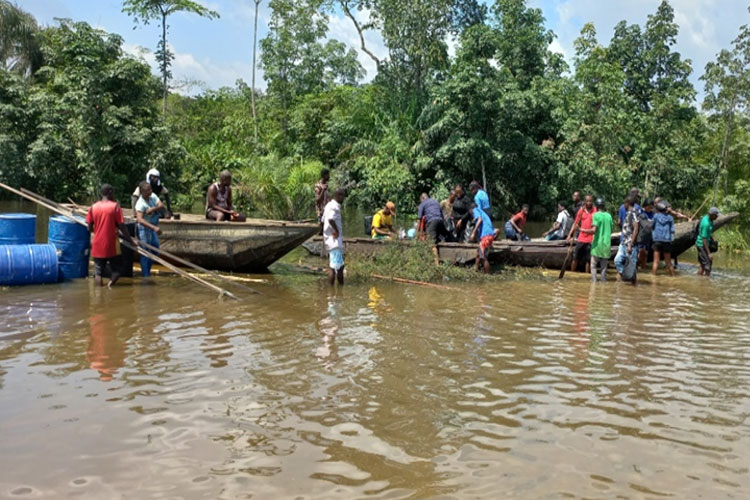 Every year Nigerians living across riverine communities become victims of a ravaging flood situation which has, in the last 10 years, consistently become a perennial menace, leading to over 600 deaths, destruction of lives and properties and disruption of social and economic activities in affected areas.

In 2012, Nigeria recorded the highest flooding experience across states of the country with a loss of revenue and diminishing economic downturn in the affected states with its attendant loss of livelihoods, lives and displacement of citizens in affected states. 10 years later, the country is again faced with yet another challenge of flooding which is adjudged by the Nigerian Emergency Management Agency (NEMA) to be deadlier than that of 2012, with close to 3 million persons displaced.

This year, the flood affected Kogi State, cutting off the road leading into Abuja the Federal Capital Territory from the confluence states, with commuters stranded, leaving a large number of truckloads of perishable goods on both ends of the road. Among other states, Nasarawa and Benue States in the North Central part of Nigeria are not left behind. Lagos State in the South-West, Imo and Anambra States in the South-East and Bayelsa, Rivers and Delta States in the South-South region respectively have been badly affected, with the East-West Road along Patani, Mbiama and Ahoada axis of the East-west road divided.

This heavy flood has destroyed and submerged houses sacked several communities and made life difficult and unbearable for large numbers of families who now find themselves at different designated IDP camps. Stranded commuters have been left with the option of taking the high risk of crossing with canoes or long and very expensive alternative routes, while farmers conveying their goods had to auction them at a loss.

The flooding situation has caused a lot of uneasiness for the average Nigerian as transportation cost has suddenly increased by 200%.

When Social Actions team visited the affected areas on the 17th of October, 2022 beginning from Ahoada axis of the East-west road, which has been cut off completely, commuters were being ferried by canoe and speedboats with so much cost to be crossed over to the other part of the road. They paid as much as N1,200 naira on speedboats and N600 on wooden canoes. Those who didn’t have as much to pay had to cross the water on foot, which, at the time of the visit, was deep into the chest region. Goods were seen scattered all over the place with no hope in sight. We also received reports of some persons who could not make it through the flooded road as they were swept away by the current of the flood. This is sad and pathetic.

So far, it has been confirmed that the Rivers State Government has set up a flood management committee and to that effect released the sum of 1 billion naira for palliatives and to cushion the effects of the flooding situation for affected families. They have also identified different primary and secondary schools designated as temporary Internally Displaced Persons (IDP) camps across the affected LGAs.

As at the time of the visit, the Team could not proceed beyond the Ahoada axis as the flow was still very high with a lot of persons scampering for safety.

The Affected LGAs in River State include Ahoada West, Ahoada East, Abua Odual and Ogba/Egbema/Ndoni areas respectively. For now, we are yet to ascertain the number of deaths and the total number of persons and families affected. We hope to get that as the flood recedes.

CAUSES OF THE FLOOD

The major culprit of flooding is always going to be the climate change associated with global warming which has altered the weather patterns thereby causing a rise in the sea level as the snows melt further into the seas and rivers. The rainfall also have shown an unusual pattern and some location not known to have heavy rainfall have experienced an increase in volume recently

The flood which has affected an estimated 27 out of the 36 states in Nigeria[2] is also a result of water released from the Lagdo Dam in Cameroun, overflowing the banks of the rivers along the Nige Basin. This situation is further exacerbated by the inability of the Federal Government to complete the Dani Hausa Dam which would have been used as a buffer to regulate the water level on the Nigerian side of the river. The River Benue and Niger and other tributaries along their coasts like Engenni and Orashi Rivers have been heavily silted over the years, making the waterways shallow and unable to contain much water volumes flowing into them.

The flooding situation could be tackled using short-, medium- and long-term measures. Beyond providing prompt emergency relief materials for the victims and displaced persons of the flood, there is a more crucial need to put in place medium to long-term measures to mitigate the floods and their effect to prevent the colossal losses in its wake.

Some of the recommendations include 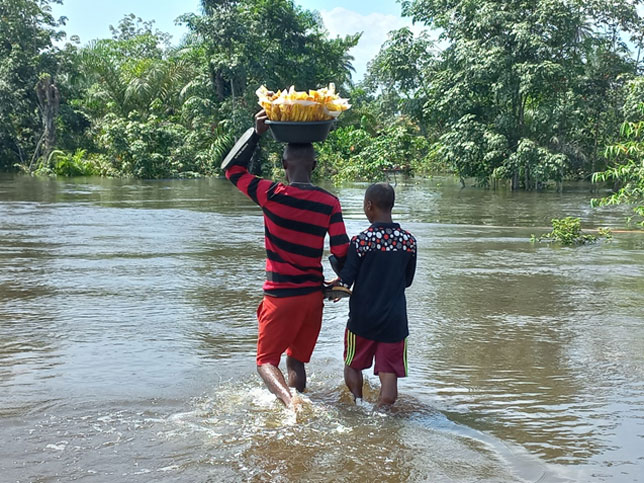 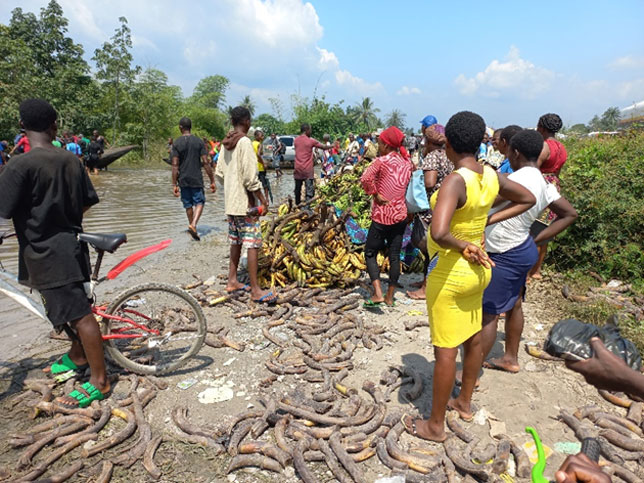 Perishable goods like plantain getting spoil as a result of long stay on one spots with no hope of getting it across to the market.

Petty traders who earn a living selling eatables to commuters along the Eastwest road are suffering from the effect of the flood are not left out. 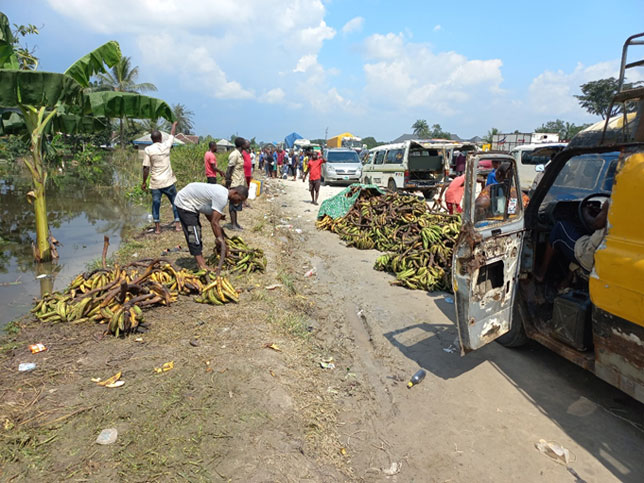 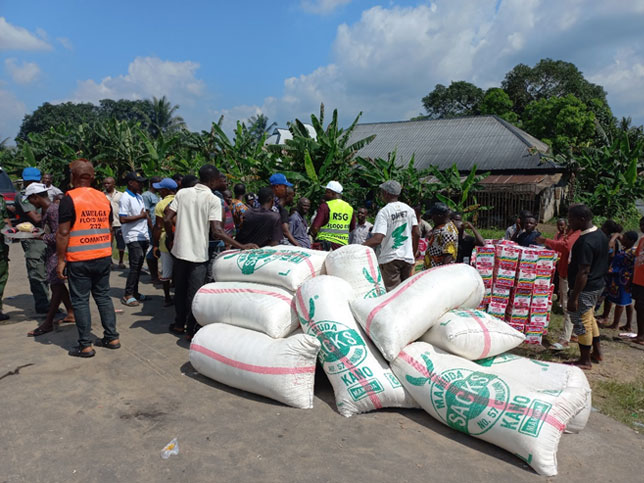 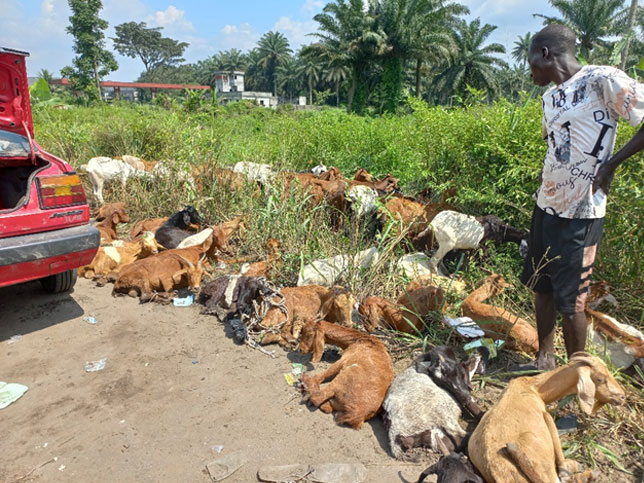 Stranded goats’ merchants with their goats at the scene