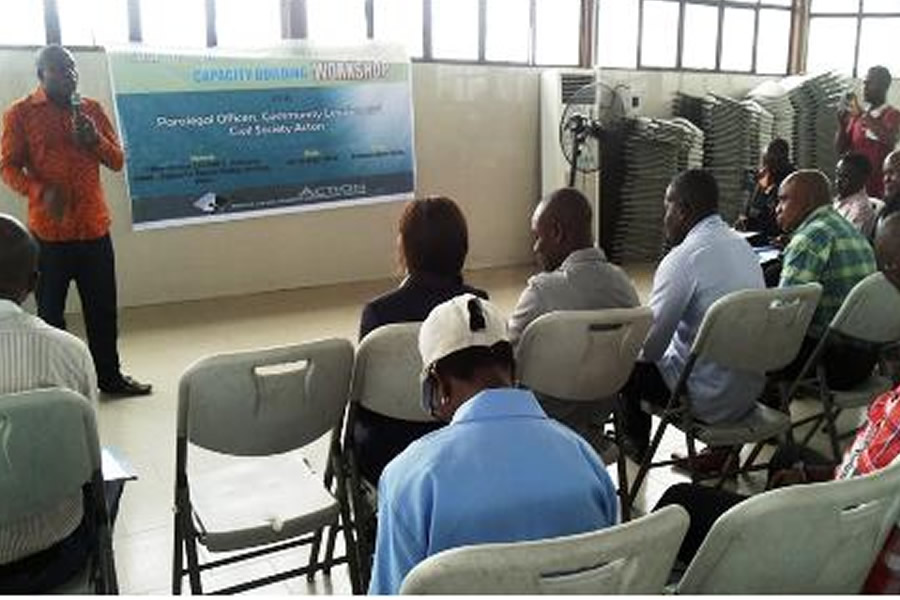 The event which witnessed the presence of 34 participants from communities in Rivers, Bayelsa, Lagos, Delta and Akwa Ibom States, also had in attendance, four resource persons amongst whom were kadiri Maxwell Esq, Megan Chapman, Anna Maitland and Andrew Maki.

At the commencement of the workshop, the organiser of the programme and Project Manager, Community Action/Para-legal Resources of Social Action, Mr Celestine Akpobari, delivered the opening remarks, stating that the aim of the training, was to empower communities to take charge of their affairs by speaking out against societal ills and demanding accountability from public and private agencies including international corporations such as the multi-national oil companies operating in some communities.

While noting that Social Action had para-legal/community centres in Mbiama, Diobu and Bori (all in Rivers) as well as in Warri (Delta) and Brass (Bayelsa), he stated that, “although it might seem like change is starting late, it is better to start late than never, and that is the reason for opening para-legal resource centres in Niger Delta states. These days, communities are challenging government policies that are not inclusive of their thoughts and ideas”.

On the first day of the training, Megan Chapman, a technical facilitator for the training and a member of the Justice and Empowerment Initiative (JEI), spoke on the attributes and functions of a para-legal. She noted that a para-legal is a non-lawyer who takes up the problem of the members of a community, with a view to finding a solution by seeking immediate help from Civil Society Organisations, lawyers or anyone qualified to know. While describing a para-legal as one who must be accessible, courageous, transparent and compassionate, she added that, such an active para-legal must also live and work in the community, in order to easily have first-hand information and eye-witness accounts of the problems bedevilling the community.

Also speaking at the training session, Andrew Maki of JEI, spoke on the techniques of a para-legal and the importance of having a para-legal programme in para-legal management. He further spoke extensively on the various sources of law such as the federal and state legislations, judicial precedents, customary laws, religious laws, as well as the categorisation of these laws into criminal and civil laws, with their respective rules of procedure.

The second day of the workshop, saw the participants exposed to a practical exercise session with Anna Maitland, also of the JEI. Participants were made to play the role of para-legals in a mock trial involving an imaginary scenario of an oil spill in an oil-producing community which negatively affected a member of the community. The trainees were expected to recall and apply the techniques and qualities of a para-legal which they were taught the previous day, in the case scenario. Impressively, the trainees showed a clear understanding of the concepts they had learnt at the training, as they were able to display the qualities of a trained para-legal.

Thereafter, the second session commenced with Kadiri Maxwell, Esq, from the Open Society Justice Initiative (OSJI) who presented a video documentary on activists and trained para-legals in the Likoni Community of Mombasa, Kenya, as they employed the techniques of community sensitisation and information-gathering from public institutions, to put pressure on their elected representatives and other government officials, which led to the emergence of a transparent and accountable leadership in their community. He also gave a detailed explanation of the importance of the Freedom of Information (FOI) Act, 2011 and how it could be applied, as well as other relevant laws such as the Environment Impact Assessment (EIA) Act, 1992, the National Oil Spill Detection and Response Agency (NOSDRA) Act, 2006 and the National Environmental Standards and Regulations Enforcement Agency (NESREA) Act, 2007.

When some participants expressed doubts as to the effectiveness of the FOI Act, Maxwell went ahead to enlighten them about various court rulings where public institutions were compelled to comply with the provisions of the Act, by providing necessary information sought by members of the public. He further maintained that, “with the FOI Act, the 1999 Constitution of Nigeria as amended, particularly Section 20 of the Constitution, the EIA Act, the NOSDRA Act and the NESREA Act, to name just a few, communities stand the chance to enforce their right to a healthy environment. These laws give communities all they require to engage the process. The question is, how far are the communities willing to go to enforce their rights?”

He finally informed the participants about the current steps being taken by the federal government of Nigeria to review the EIA Act following the setting up of a ministerial committee to prepare an EIA Amendment Bill, and encouraged the participants to take advantage of it, by forwarding to the committee, recommendations to address the loopholes in the current EIA Act which are being exploited by some international oil-producing corporations.

The highlight of the training workshop was the feedback session after the in-training, where the trainees were engaged in series of mentally-stimulating practical exercises to test their understanding of the various lectures they had received, with a view to ascertaining the overall success of the capacity-building workshop.

At the end of the two-day workshop, the 34 participants unanimously expressed their gratitude to Social Action for the opportunity given them to attend the programme which marks a phase in a sequence of training workshops scheduled to hold periodically across the region. The next phase is expected to commence at a later date.