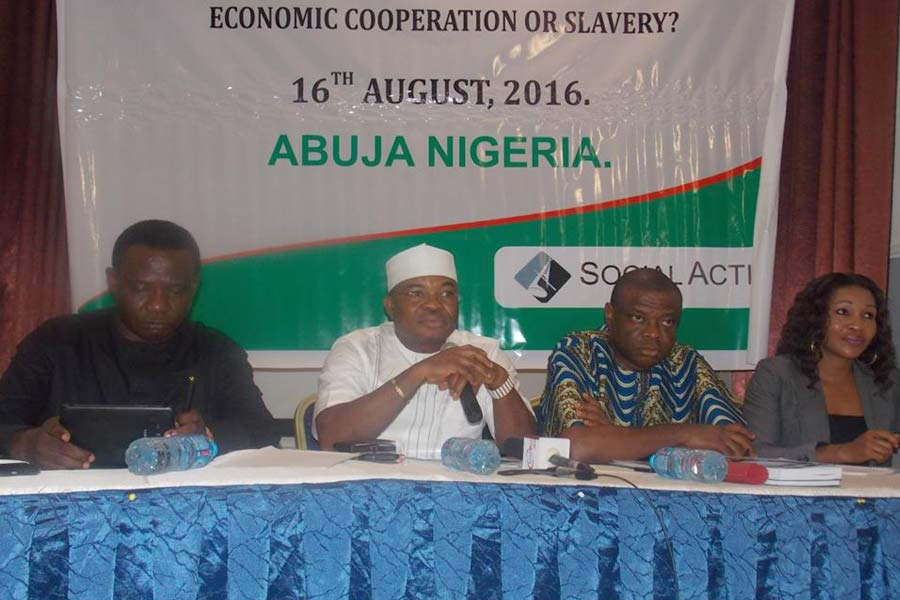 Stakeholders that include Trade groups, Chambers of Commerce, Civil Societies and Labour organizations have critically faulted the European Union promoted Economic Partnership Agreement, EPA, describing it as counter-productive to the interest of a country such as Nigeria. They said the trade agreement which imposes pressing and extensive import liberalization on participating countries before ever their supply capabilities have been built or strengthened will be injurious to them. Stakeholders made this point at a Policy Brief and Roundtable on EPAs organized to examine and collate the inputs of Nigerians on the objectives of the Economic Partnership Agreement with the E.U in Abuja.
Speaking at the meeting, Representative of the National Chamber of Commerce, Industries, Mines and Agriculture, Mr Saleh Ya’o said the proposed partnership does not portend any significant good for Nigeria pointing out, that it was necessary to create awareness on this reality and sustain the pressure on the government not to endorse the Agreement.
Also speaking, President of the National Association of Nigerian Traders, NANTS, Mr Ken Ukoha, explained that the secretive and arm-twisting nature of the trade agreement negotiation by the promoters speaks volumes of the spirit and character of the Agreement. According to Mr Ukoha, the signing of bi-lateral or multi-lateral agreements between countries or blocks are typically done in full public and media presence saying that the EPA has in many cases been signed by many African countries in the obscurity and secrecy of remote hotel rooms.
The Traders Association chief explained that the EPA has many far-reaching consequences for Nigeria as according to him, “it will lead to capital flight; it will shut us out of South-South trade with the Asian Countries, so if sign on Europe, you have shut yourself . . . we should be wiser”. He argued further that the EPA will worsen the crisis of FOREX management and interest rates; “. . . at a time, it will be extremely difficult to manage foreign exchange and interest rates will skyrocket. But what is in our basket to send to Europe”?
Reviewing the Policy Brief document of the Social Development Integrated Centre (Social Action) on the E.P.A at the Roundtable, Convener of Comrade Jaye Gaskia pointed out that the Trade Agreement will provoke runaway unemployment, capital flight, closure and death of local industries as well as compromise regional integration in West Africa. He urged the Nigerian Government to stand its ground and resist both the inducement as well as pressure to sign the deal.
Earlier in her welcome address, Head of the National Advocacy Centre of Social Action, Mrs. Vivian Bellonwu-Okafor, stated that the Roundtable was organized to create awareness on issues on the EPA and to give Nigerians divers sectors and backgrounds the room and platform to examine the proposed trade pact and put forward their views on it.
She stated that what any responsible government would at any time pursue is what ultimately would benefit and protect the wellbeing and interest of its citizens and warned that the EPA in its present form, sadly does not.
Bellonwu-Okafor who described the proposed trade partnership as “unequal yoke” stressed that the campaign would be sustained against the trade agreement adding that the organization would constructively engage different bodies, groups and individuals relevant to this with a view of ensuring that Nigeria was not unwittingly dragged into a modern day economic enslavement.
Messages came from wide-ranging groups, bodies and individuals including the Nigerian Labour Congress, N.L.C, the Trade Network, the Right-To-Know, Socialist Workers League, the Nigerian Association of Automobile dealers and Technicians, the National Association of Micro, Small and Medium Enterprises (NSMEs), the media amongst others.
The Economic Partnership Agreement, EPA is a set of trade agreements initiated by the European Union to control trade between it and its former colonies – the African, Carribean and Pacific (ACP) Countries.