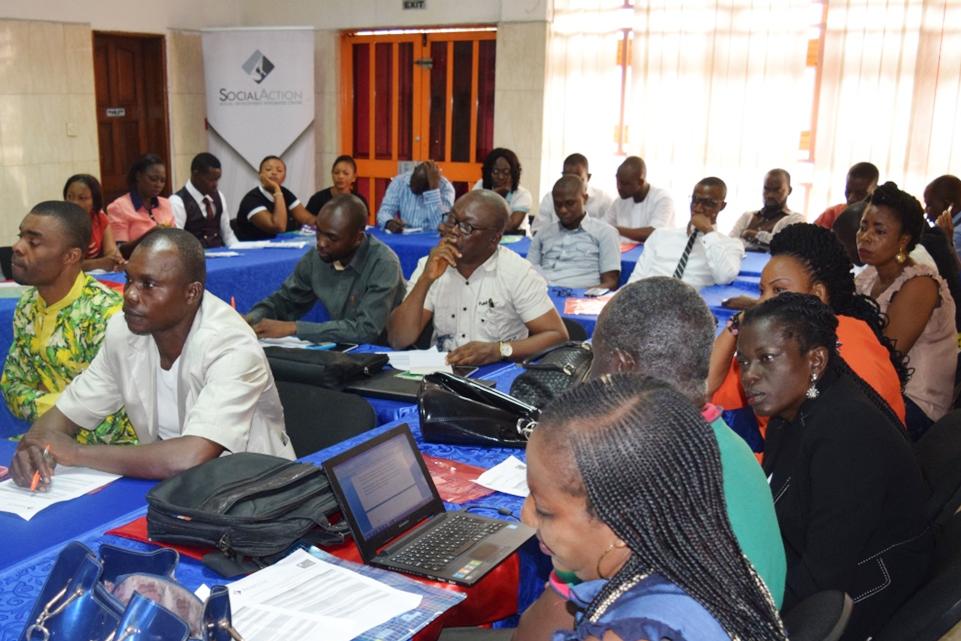 To deepen accountable government through the 2019 electoral process, the Social Development Integrated Centre (Social Action) and other citizens groups in the Niger Delta is tasking political candidates over political commitments to citizens. Thus, political accountability was the thrust of a training workshop organised by Social Action on Tuesday, October 9 and Thursday 11, 2018 in Port Harcourt, Rivers state and Benin city, Edo state respectively. At the workshops, Social Action’s Isaac Botti and Peter Mazzi noted that candidates’ governance commitments must translate to benefits for citizens. They stressed that the time to emphasise that is now – during the electioneering process.
With the theme, Mainstreaming Accountability into Electoral Process in the Niger Delta, the workshop tailored toward strengthening citizens’ capacity to engage political office aspirants and political office holders in committing to the social contract by including transparency and accountability agenda in their programmes. The training, which was supported by MacArthur Foundation and implemented through a partnership with the Shehu Musa Yar’Adua Foundation, highlighted the benefits of citizens’ engagement with electoral candidates toward ensuring that crucial accountability and transparency commitments are clearly articulated and delivered to citizens. The electoral process, therefore, provides opportunities for realizing vital anti-corruption outcomes.

Through the training, concerned grassroots groups from several communities across the Niger Delta were encouraged to establish sustainable relationships that will bring mutual benefits through collaboration building and engagement. The workshop helped participants to define political engagement goals as what needs to be changed, in the short-run or long run, and on what matters to the citizenry; that is in the light of enacted governance policies, regulatory action, performance programming, and related funding and attitudinal change toward corruption.
The workshop also focused on innovative strategies and tools for engaging (as well as documenting and following-up) on performance commitments extracted from elections aspirants and candidates. Also highlighted was the mobilising and organising power of the electorate to question manifestos and programmes of candidates; with citizens enjoying the privilege to set and shape political discourse agenda. Some avenue for such includes the use of advocacy, political debate, traditional and social media channels, and socio-cultural engagement such as town hall meetings, religious events, and reception and award ceremonies.

The training dwelled on issues around women and youth development, and health and educational improvement. Related critical problems that emerged as point of focus by participants include commitments on political, economic, educational empowerment, maternal improvement, gender inclusion (through political involvement), job creation and elimination of harmful cultural practices. Participants also called for youth-friendly centres, and for increasing the funding allocation on health from about 5% toward meeting World Health Organization (WHO) recommended 15% of the national annual budget, and also the promotion of gender equality.
The training emerged as a remarkable attempt at strengthening the effort to deepen good governance, transparency and accountability; that is, toward building a progressive character of political performance through the 2019 electoral process; and to enhance political space benefits to citizens in Nigeria in general.
Participants made recommendations, including, curtailing the problem posed by actions of godfathers, formulating community development plans through grassroots-level needs assessment toward strengthening transparency and accountability, and discouraging the disempowering youths from their political potentials by luring them, through stipends, into acts of violence and vandalism.