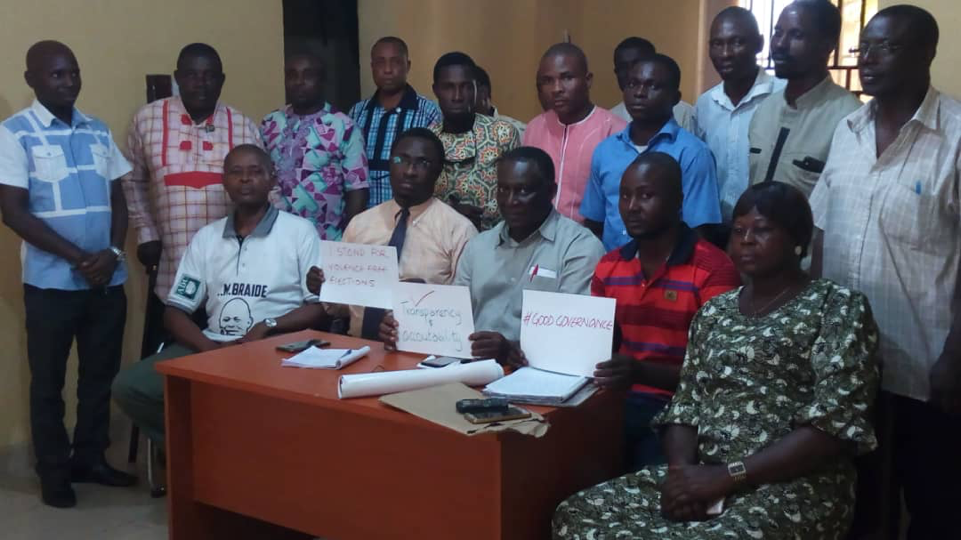 Advocacy Visit to the Secretariat of African Democratic Congress in Port Harcourt
The Social Action’s campaign to rid the Niger Delta Region of corruption and instate the culture of transparency and accountability in the Niger Delta States took another dimension as the Anticorruption Network members paid a visit to the Secretariat of the Action Democratic Congress. This visit is one among several other visits schedules with at least five political parties in the state. The objective is to mainstream accountability into Electoral Process in the Niger Delta as a way of preparing the minds of the intended leaders on their responsibility to be accountable to the people and to implement policies that would promote good governance if elected.
The visit coincided with the day of the party’s Executive Committee meeting, which afforded the team the opportunity to meet with the party’s Excos and other aspirants which include the party’s senatorial candidate for Rivers East Senatorial District, Hon. Clay Nduka Ogbonna.

Figure 1 Chairman, Exco Members and Candidates of the African Democratic Congress (ADC) Port Harcourt with the Anticorruption Network members
At the meeting which was cheered by the party’s Chairman in Rivers State, Dr. Kalada Irunabere, the Anticorruption Team explained the reason for the visit and made it clear that it was not a political visit but a campaign for the support for transparency and accountability.
The Chairman on behalf of the aspirants affirmed that accountability is one of the tenets of the party as embedded in her constitution. Hon. Clay Nduka Ogbonna explained further that as a senator, he will run an open and participatory administration, were representation will be according to the will and aspiration of his people in Rivers East Senatorial District in particular and the Rivers people as a whole.
While responding, the leader of the team, Peter Mazzi thanked the chairman and Exco members of the party for the opportunity to meet with them and harped on the importance of remaining steadfast to the party’s manifesto before, during and after the elections because the citizens would hold them to their promises if elected.
This advocacy visit is one among other visits to selected political parties and aspirants in Rivers State on the need to engage political actors on the dangers of curuption to the state and the need to imrove on good governance through transparency and accountability before they are voted into office. The project is sponsored by Macarthur Foundation, through the Shehu Musa Yar’Adua Foundation.