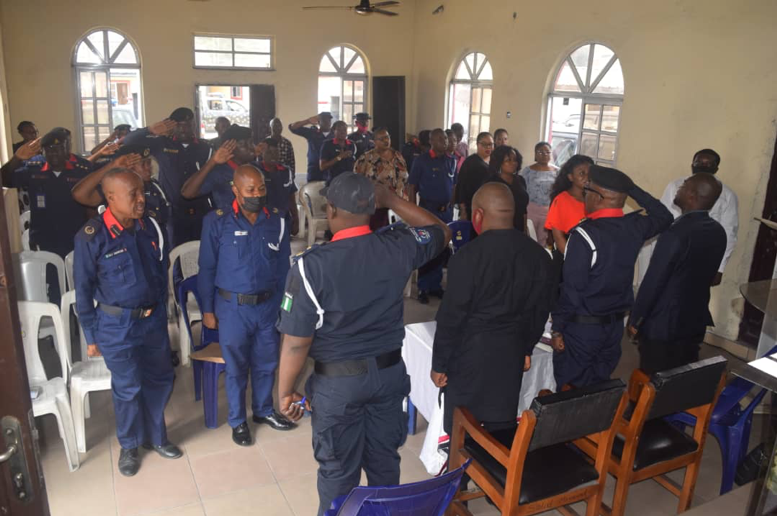 Civil Rights Council, Port Harcourt, holds a lecture to educate men of the Nigerian Security and Civil Defence Corp on the “fundamental human rights of citizen’s vis-à-vis, the power to arrest, investigate and the detention of suspects.” The lecture, which was in collaboration with the leadership of the NSCDC and other stakeholders, aimed to sensitize members of the Corp on how to carry out their duties effectively within the ambits of the law.

Citing the Laws and Administration of Criminal Justice Act 2011, Barrister Victor Nweke Esq, who took the lecture, stated that if the issues of human rights abuses are not addressed, it would inevitably affect the peace of the society. According to him, the legal framework for the protection of the fundamental human rights of Nigerian citizens makes provision for everyone to be protected whether a security agent or a civilian. The law, he said, is meant to prevent the strong from obliterating the life of those considered weak. Citing relevant sections of the Constitution of the Federal Republic of Nigeria, he pointed out some of the rights which include the right to life, right to dignity of the human person, right to personal liberty, Right to a fair hearing, amongst others.

Still, in the course of the lecture, the legal practitioner also educated the security agents on what he titled “The Nigerian Security and Civil Defence Corps and Power to Arrest.” In defining the term, he noted that the NSCDC is not limited or exclusively created to arrest culprits associated with the crime of pipeline vandalization alone. As a security outfit, they have been conferred with the power to arrest a citizen who has flouted any portion of the law and initiate prosecution steps in the name of the Attorney-General of the Federation as the constitution provides. Also, under the Administration of Criminal Justice Act 2011, Nweke, dissected the provisions of the act and mode of application and what the law expects of these security agents.
In their responses at the end of his lecture, the officers welcomed the prospect to work and collaborate with CSOs to foster a peaceful and healthier society. However, they raised their concerns about the antagonistic disposition of most civilians and civil society organisations towards security agents. They claimed that they had to resort to force because suspects are noncooperating and often resist arrest. Speaking in the course of the meeting AAC Den Moses admitted that while the law has made provisions on how offenders should be handled, the protection of human rights and defence is something that security agents no longer enjoy. He expressed his dissatisfaction with human rights defenders who are quick to defend the civilians with the instrumentality of the law but ignore the security agents because the society already has a negative image of uniform men.

Reacting to his concern, the National Coordinator of CRC, Bar. Arochukwu Paul Ogbonna asserted that these findings and concerns are the essences of the collaborations, discussions and meeting. He assured the security men that CRC is an organization that is primarily built to defend the fundamental human rights of all law-abiding citizens of the country without any exception. He encouraged the officers to report any case of a breach of their fundamental human rights to CRC. While issues on arrest and challenges faced by these security agents in the course of discharging their duties was a major part of the conversation, clarity and balance were maintained for the benefit of the officers and civilians they are employed to protect.
At the end of the meeting, the officers of the NSCDC pledged to work together with CRC and other civil society organisations to reduce crime and foster a peaceful Rivers Society within the ambit of the law.