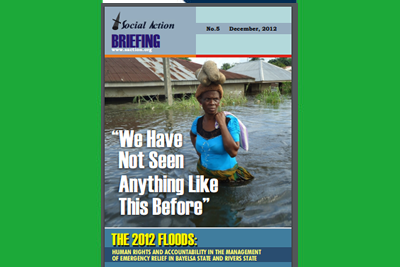 Social Action is calling for probe into the death of Mrs Maureen Lucky, an HIV positive woman who was ejected from Okwuzi flood relief camp in Ogba/Egbema/Ndoni Local Government Area of Rivers State on the orders of Mr. Tele Ikuru, the Chairman of The Rivers State Flood Management Committee and Deputy Governor of the State. Mrs. Lucky, an indigene of Okwuzi community was one of the many persons whose homes were submerged by the recent flooding that occurred in parts of the state and country. She along with her children subsequently went to seek refuge in the camp set up by the state government in Okwuzi. Following reports by Social Action about the condition of Mrs. Lucky and other sick residents in the camps, the Deputy Governor Mr. Tele Ikuru and the Chairman of the Local Government Council, Mr Raymond Wokocha, visited the Okwuzi camp where they ordered the forceful eviction of the Mrs. Lucky who, with her children, ended up in an  uncompleted building where she died a few days later, on November 24th 2012. Read Full Report