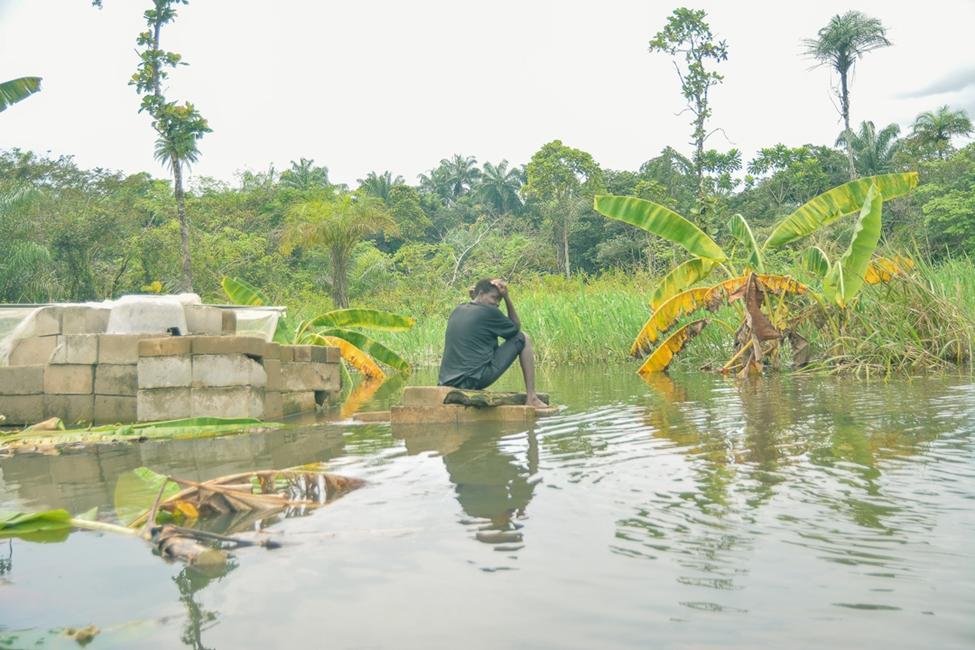 Victims bemoan the loss of livelihoods as floods destroy crops

Some of the worst affected communities are in the Niger Delta States of Rivers and Bayelsa where Social Action’s monitoring teams witnessed massive displacement and desolation amidst very inadequate or non-existent intervention by federal, state and local government authorities, particularly in Rivers State. In the affected communities, many crammed into makeshift camps set up in buildings on grounds above the flood waters. In many cases, especially in Rivers State, government presence was completely lacking.
At Ahoada West Local Government Area (LGA) in Rivers State, Social Action’s monitoring team visited Mbiama, Akieoniso, Akinima, Joinkrama 1, Joinkrama 2 and Joinkrama 3 in mid-October. At Akieoniso, the entire community was submerged. One woman had died. Children were bathing in the flood waters with rashes on their bodies. 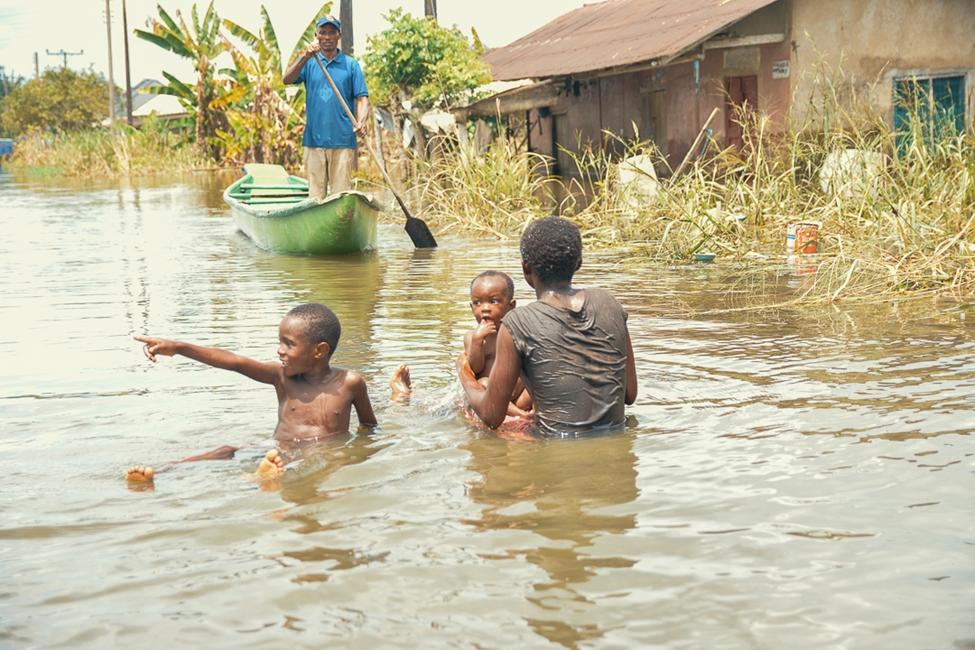 Community members sat under canopies along the road with some of their properties and household utensils. Community leaders reported that the National Emergency Management Agency (NEMA) brought only five canopies to the over one thousand people affected by the flooding in the community.
At Akinima, the headquarters of Ahoada West LGA, a community hall was turned into a camp for displaced persons. Even the camp director complained that the government had not provided anything for the victims. IDPs were seen inside the building with their belongings with many of them complaining of mosquito bites and requesting for the donation of insecticide-treated nets.
At the LGA Secretariat where another camp was set up for displaced persons, there were neither amenities nor supplies. Weeks after the flooding, neither the state governor nor the local government chairman had visited the area.
However, on October 19, the federal government, represented by Vice President Yomi Osinbajo visited some of the worst affected communities in Rivers and Bayelsa where he described the floods as a ‘monumental disaster’. Promises of relief had not translated into significant action as at the end of October 2018.
A visit to flood-affected areas in Ogba/Egbema/Ndoni LGA (ONELGA) in Rivers State at the end of October showed that the flood was receding. In Okwuzi community, some flood victims were seen standing clearing their houses in preparations to return home as the flood recedes. Others were also seen carrying their canoes on their head as dry land appears. No IDP camp was set up for flood victims in ONELGA.
In Bayelsa State, the Social Action visited many flood-affected communities and IDP camps. At Igbogene Camp 1 described by camp leaders as “Federal Camp”, the living condition and government attention was better felt compared to those at Camp 2, the “State Camp” at the Universal Basic Education facility at Igbogene town. Flood victims at the Federal Camp have government attention with security, free meals twice daily, medical facility and NEMA presence. However, those at the State Camps seemed abandoned without care except a little support from churches, private individuals and few bags of rice, mosquito nets and mattresses donated by NEMA and the Bayelsa State Emergency Management Agency (SEMA). 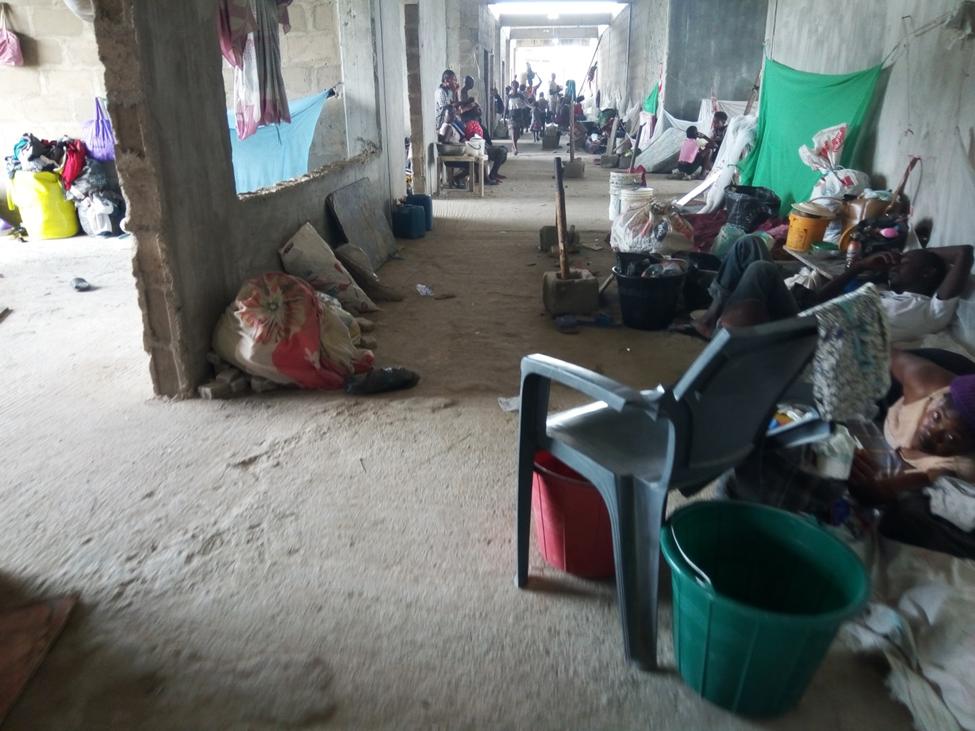 As the floods recede, the starvation and hardship would last for months. Victims are worried about how to restore their livelihoods following the loss of all their crops. With many subsisting on their farms, it would take time to plant after the coming harmattan season and months more before they can harvest crops again. Many do not have any savings to live on during the intervening period. There is also concern about the potential for an outbreak of diseases including malaria, cholera and typhoid. 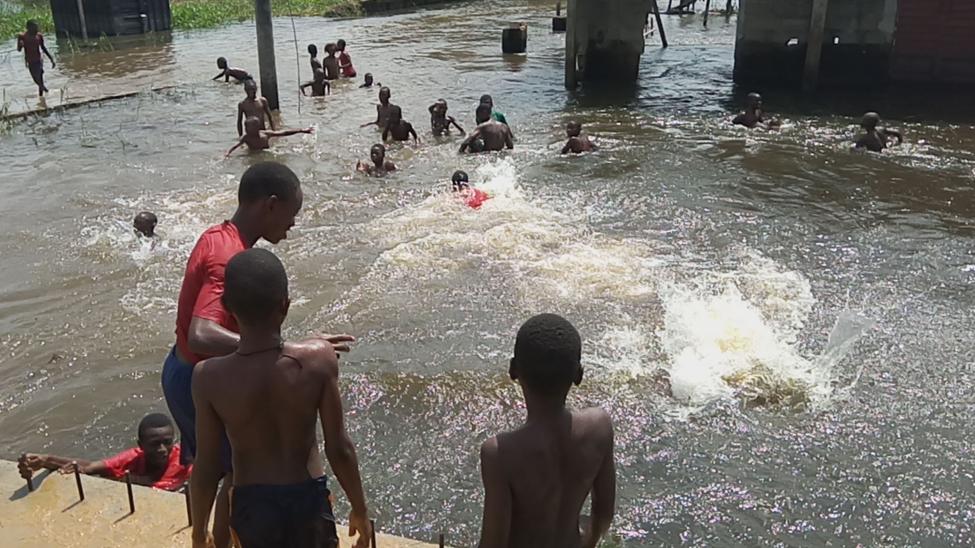 Children bathing and swimming in the flood water in Igbogene Community, Bayelsa State

Social Action is calling on the government, international agencies and government to maintain a presence in the area even as the floods recede as health and nutrition and food security concerns must be addressed in the affected communities into the coming months.
With the 2018 floods following unprecedented severe floods in 2012, there are indications that climate change is in effect. Concrete actions must be taken by governmental and non-governmental entities to address the adaptation needs as flooding and other severe weather conditions become more frequent.