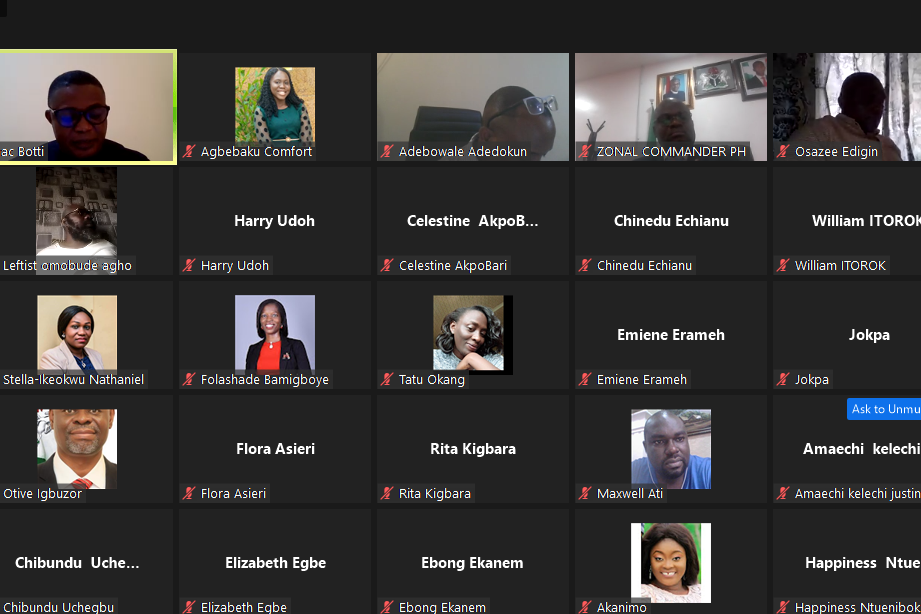 Stakeholders in the Niger Delta Region have called on the Federal Government and the Ministry of Niger Delta Affairs to make public the Forensic Audit report of the Niger Delta Development Commission (NDDC) to reposition the commission for effective service delivery. This call was made on Thursday, 8th September 2022 at a Virtual Public Dialogue on, “Effective Service Delivery in the Niger Delta: A need to Reposition the NDDC for Accountability” organized by Social Development Integrated Centre (Social Action) with support from the MacArthur’s Foundation.

In an opening remark on behalf of the Executive Director, Mr. Botti Isaac, Programmes Coordinator of Social Action said that the event was coming at a time when the underdeveloped Niger Delta region is littered with abandoned projects due to the gross mismanagement and misappropriation of funds allocated to the NDDC.

In an opening remark on behalf of the Executive Director, Mr. Botti Isaac, Programmes Coordinator of Social Action said that the event was coming at a time when the underdeveloped Niger Delta region is littered with abandoned projects due to the gross mismanagement and misappropriation of funds allocated to the NDDC.

Beside commissioning and submitting the forensic audit report to the President, Botti noted that no concrete action has been taken to publish the report, address corrupt officials in the NDDC and reposition the commission for accountability. He hoped the dialogue would, therefore, open up the space for deliberations on the way forward at committing the government to repositioning the NDDC for a holistic development in the Niger Delta Region.

In a goodwill message, representatives of the anti-graft agencies; Independent and Corrupt Practices and Other Related Offences Commission (ICPC) and the Economic and Financial Crimes Commission (EFCC) affirmed their commission’s resolve to tackle corruption in public institutions like the NDDC.

Representing the ICPC, Assistant Director of the Public Enlightenment and Education Department, Mrs. Ese Okwong said the ICPC has the Constituency & Executive Project Tracking initiative which has recorded success in tracking projects within Nigeria. She, therefore, encouraged the organizers of the event to continue with this initiative and involve the ICPC to ensure Niger Deltans get value for their region’s wealth.

Mr. Nwokike Nwanneka representing Port Harcourt’s zonal commander of the EFCC also regarded the dialogue as a welcome idea as the Federal government cannot continue pumping money into the NDDC without substantial evidence of development in the Niger Delta Region.

In a paper presentation, Dr. Otive Igbuzor the Executive Director of the African Centre for Leadership and Strategy Development (Centre LSD) and Chief of Staff to the Deputy Senate President, lamented the structural deficiencies of the NDDC. According to him, the commission was not well structured to engender development. “The NDDC like its predecessors are all political intervention agencies with a lot of political trappings in the appointment and conduct of its major officials, and operation of the agencies. What is needed in the Niger Delta is a development agency to be peopled by Development experts and technocrats and not politicians”, argued Dr. Otive.

Similarly, the Director–General of the Bureau of Public Procurement (BPP) represented by the Head of Research, Training & Strategic Planning, Adebowale Adedokun MCIP, said holistic development requires people’s active involvement in the process. Hence, there is a need for the BPP to carry out consistent procurement audit as well as the perception of the public on projects to see if it matches expectations. He revealed that the BPP plays a statutory function in terms of Monitoring and Evaluation, and the best way forward is to partner with CSOs in terms of project monitoring.

The panel session anchored by Dr. Harry Udoh with panelists from Civil Society Organizations; Madam Faith Nwadishi, Tolulope Agunloye, and the ICPC, Mrs. Ese Okwong emphasized the need for fiscal transparency in the NDDC. They appealed to the Federal Government to make public the NDDC forensic audit report and fish out those indicted by the report in the abandonment of the over 12,000 projects in the Niger Delta region.

To ensure effective service delivery in the Niger Delta, panelists argued that all details of procurement activities should be clearly stated and a community development plan should be made.

In the end of the dialogue, it was a unanimous opinion by participants that every effort geared towards the repositioning of the NDDC should be collective. They also reaffirmed their resolve to advocate for a well-structured and repositioned NDDC. A starting point is to ensure the Presidency makes public the forensic audit report of the NDDC and inaugurates a substantive board for the commission.