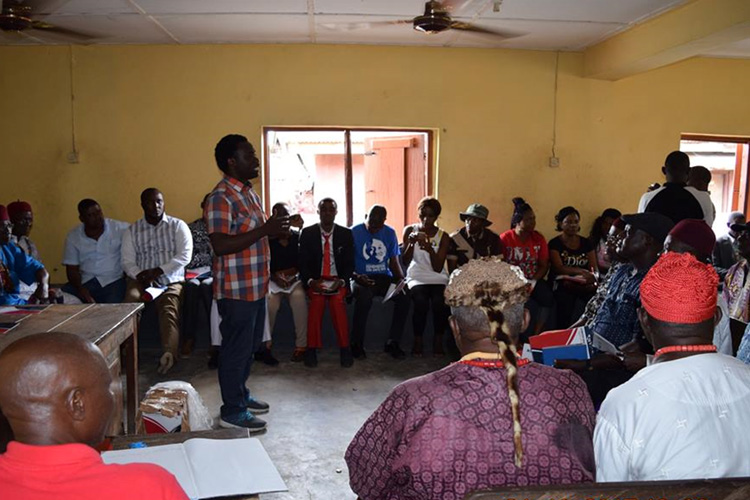 Ahead of the UN Climate Conference in Bonn, Germany, Social Action organised its School of Ecology and Climate Action in Calabar, Cross River State, Nigeria in October 2017. Through this space, Social Action worked with Nigerian communities and civil society groups to advance alternative discourses and popular mobilisations aimed at building community-led platforms for ecological justice in in the country. Specifically, the School of Ecology and Climate Action promotes grassroots understanding of the interconnectedness of livelihood losses, environmental abuses and conflict within the broader climate change discourse; while providing opportunities for civil society and environmental actors to plan and take action towards challenging prevailing climate change and environmental management paradigms. The School of Ecology and Climate Action specifically targeted communities affected by the negative impacts of gas flaring in the Niger Delta basin, forest-dependent communities in the Cross River basin, communities affected by drought in the Lake Chad basin. Participants included young activists, women groups, media practitioners focused on environments and climate change, and representatives of NGOs. The School featured field trips to climate change mitigation sites in Cross River State, lectures, debates, planning session and documentary film screenings.
Environmental experts posited that the effects of climate change were already shaping our reality. Chima Williams of the Environmental Rights Action/Friends of the Earth, Nigeria in his presentation informed the audience that increased cases of farmer-herdsmen clashes were traceable to climate change and the effect it has had on the grazing patterns of herdsmen. Similarly, he reflected on the rise of conflict in the northeast of Nigeria, saying it is mostly a result of the poverty and hopelessness which the drying up of the Lake Chad- an apparent effect of climate change. Fighting climate change will demand a clear understanding of all the manifestations of its effects. 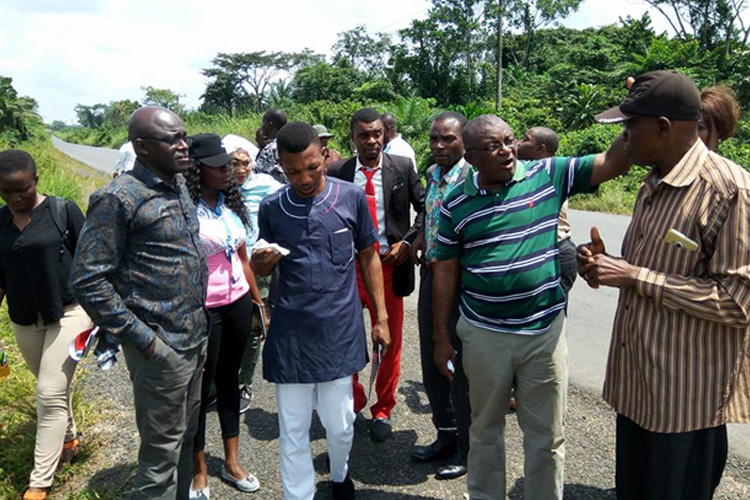 Foremost environmentalist and nature conservation activist makes a point during a field trip to study the impacts of Cross River REDD+ and the proposed Super Highway projects.

Odey Oyama, an environmentalist and nature conservation activist, led a discussion on the controversial United Nations Programme on Reducing Emissions from Deforestation and Forest Degradation (REDD+) that is being implemented in Cross River State. The REDD+ climate change mitigation scheme that promises to pay the government money for conserving the Cross River forests to serve as a sink for greenhouse gasses. However, the implementation of the programme in Cross River and many other locations worldwide has resulted in land grabbing and human rights abuses. Members of REDD+ impacted communities at the School narrated their ordeal, including violations of livelihood rights occasioned by the activities of the state government and other agencies promoting the use of their traditional forests for REDD+. According to them, without consultation or seeking their input or buy in, they were banned from entering their traditional forests and benefiting from the life-sustaining products they have had access to for generations.
The Social Action School of Ecology and Climate Action contributed to increasing the knowledge of participants on impacts of development projects and so-called climate change mitigation projects on human rights. The School created spaces for grassroots and community organising in locations where the effects of climate change are evident, where mitigation and adaptation schemes are being implemented and where adverse environmental practices persist. Thus the School contributed to the emergence of community-oriented and sustainable alternatives for climate change mitigation in Nigeria.

The School of Ecology and Climate Action will be an annual space for addressing Climate change challenges in Nigeria.

Social Acton Takes the Campaign for Ecological Justice to COP 23 in Bonn
From the 2nd to the 8th of November 2017, Social Acton’s Climate and Energy team were in Bonn, Germany to amplify the call for ecological justice for Nigerian communities that have been affected by the daunting realities of climate change. The series of events created the opportunity for the team to networks and also join the global call to push down greenhouse emissions below current alarming rates. 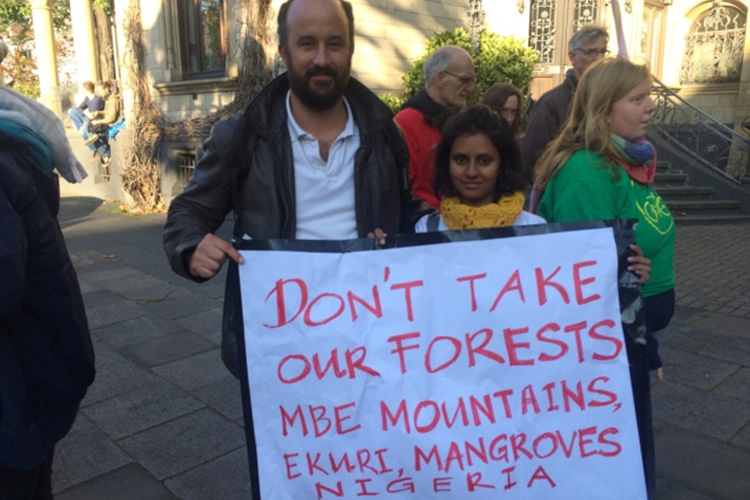