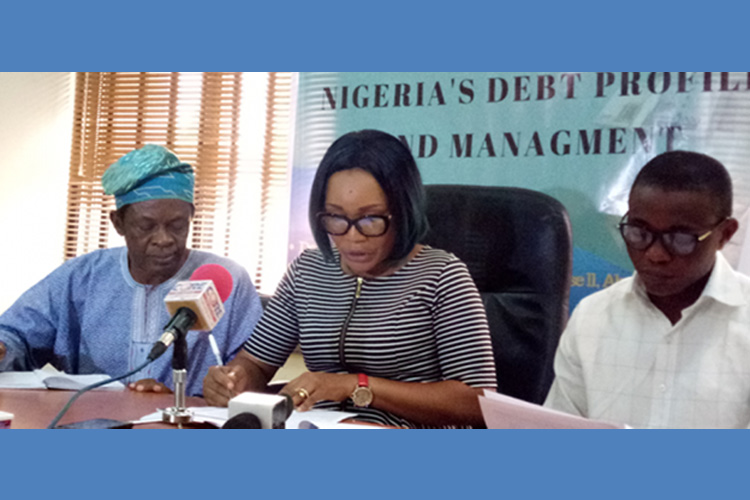 The text of press briefing on Nigeria’s debt profile and management by the Social Development Integrated Centre (Social Action), Abuja, Nigeria, October 19, 2017.
At a National Conference on Public Debt Management in Nigeria organised by Social Action in November of 2015 in Abuja, Social Action presented an advocacy research report on Nigeria’s debt profile and management, including state-level debts. Social Action warned that the indicators emanating from across the economic sectors do not support any further ramping up of debts. We called for action to towards sustained reduction in the debt profile of both the national and sub-national debts.
Rather than heed this intrinsic warning, government, making some shallow explanations, predicated on equally irreconcilable calculations and projections, embarked on a borrowing spree that saw the country’s debt shoot up from N12.06 trillion at the end of 1st quarter of 2015 to N19.6 trillion in June of 2017. Today as they say, the rest is history; we are all witnesses to the slumping of the economy under pressure, and how it went into recession.
Suffice it to say that loans or borrowing (as the case may be), is not and would never be a substitute for astute economic management. This is particularly true of a country like Nigeria where corruption and mismanagement have held the nation by the jocular. If it were, with the volume of money the country has borrowed in the past decades, Nigeria would have been an epitome of economic prosperity.
At this juncture, permit me to have us take a cursory look at a run-down of some of the loans taken by the country in the past 4 to 5 years; 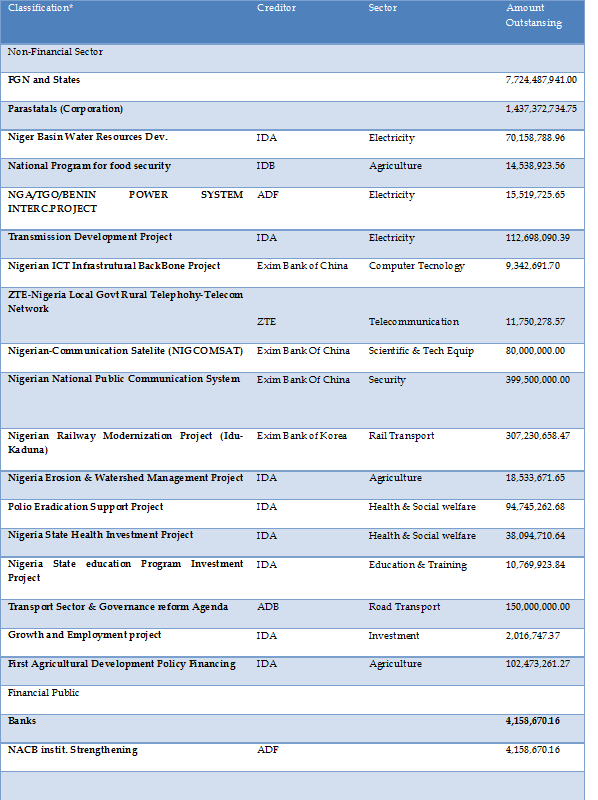 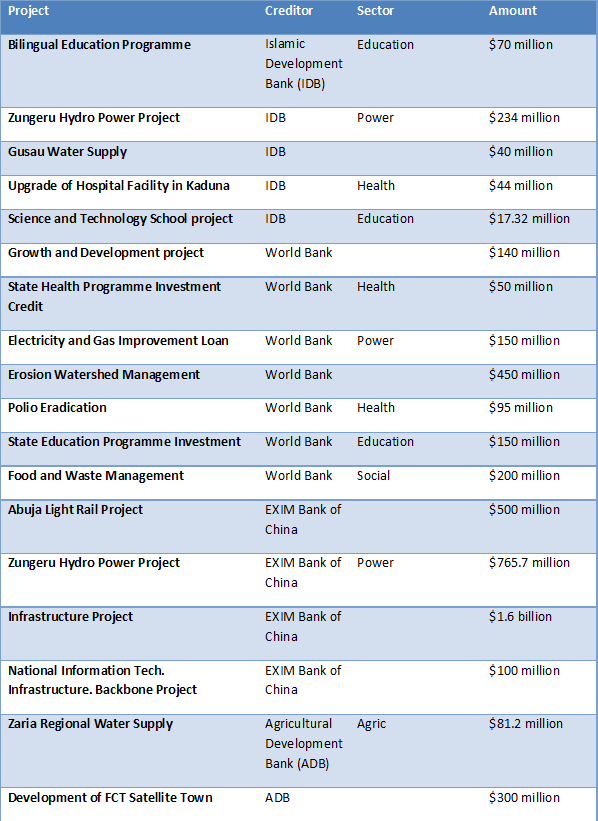 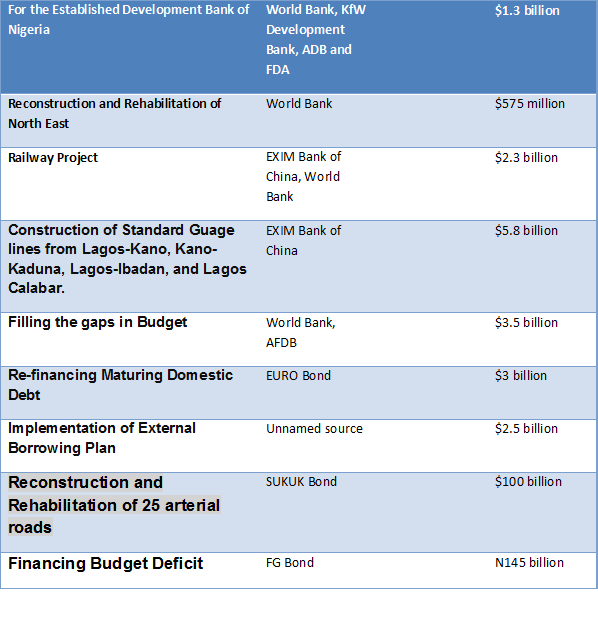 From this table, we can all see for ourselves the nature and manner of loan acquisition in Nigeria. Whereas the law specifies in Section 44 (1) of the Fiscal Responsibility Act (FRA) that;
“Any government in the Federation desirous of Any Government in the Federation or its agencies and corporations desirous of borrowing shall, specify the purpose for which the borrowing is intended… detailing the economic and social benefits of the purpose to which the intended borrowing is to be applied”.
The loan table (we had just reviewed) shows that many loans obtained are merely amorphous. With no clear-cut heading, project or purpose, they simply flout the Fiscal Responsibility Act. The FRA was abundantly clear when in S.48(1), it provided that; (1) The Federal Government shall ensure that its fiscal and financial affairs are conducted in a transparent manner and accordingly ensure full and timely disclosure and wide publication of all transactions and decisions involving public revenues and expenditures and their implications for its finances.
And so while it is the intent and purpose of the FRA to entrench transparency in the conduct of Fiscal and financial affairs including debt management, government has been in breach of these legal provisions. It is in this guise that Appropriation bills merely stating that part of budget revenue would be sourced from borrowing without specifying which activities and projects the borrowing would be applied have been severally prepared and passed by the legislature (in both Federal and State levels) in clear violation of the law. This same impunity has also been displayed towards S.41 (1) of the FRA which held unequivocally that (a) “Government at all tiers shall only borrow for Capital expenditure and human development…”. Loans have been taken to fund items that fall strictly under recurrent expenditure line including payment of salaries, overheads, funding of foreign trips etc. Till date, past and present governments have refused to set borrowing limit (Cap) for loan acquisitions as provided by law or allow popular input into loan acquisition decision-making process.

Loans and Nigeria’s Development
While the past administration did not display much responsibility as regards to borrowing, the present administration simply made a bad situation worse. Within a space of two years, the Nation’s debt profile shot up by an alarming 58% with no signs of relenting (going by the frequency and volume of loan requests going to the National Assembly). The federal government has been borrowing heavily and consistently over the years while refusing to hinge debt sustainability on realistic principles of revenue generation capacities of an economy instead of a mere academic ruse of debt to GDP ratio. Add this to unbridled sleaze and mismanagement, problems naturally set in: Nigeria has consistently for the past years now operated a deficit budget even as it devotes a painful chunk of budgetary allocation to debt servicing for projects or services the citizens hardly ever enjoyed. And so while Nigerians bemoan poor budgetary performance year after year, our creditors simply smile to the bank. A look at the figures tells this painful story; 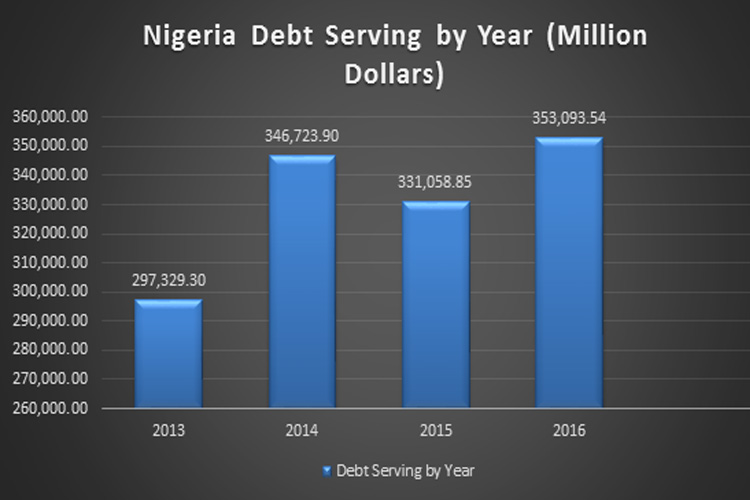 At this juncture, let me draw your attention to a looming danger facing us all as citizens of this country; the government has initiated moves seeking to amend the laws to enable it formally borrow for Recurrent Expenditure. This is a looming danger to our economic health.
The story of Nigeria and debt is well known I believe to all of you and the experience of hardship and near economic strangulation in the hands of committee of creditors including the Paris Club, World Bank and the IMF in the form of austerity measures is still too fresh in our memories as Nigerians for us to go to sleep.
These monetary bodies including the IMF which are traditionally reticent especially in matters like this have come out openly to admonish the government to refrain from further borrowing stating clearly that the nation’s economy was not doing well enough to support such level of debt acquisitions and consequent debt servicing. We note that rather than the accumulated debts translating to real growth and development for the nation and by extension to better condition of living for the teeming population, it has continued to remain a burden as monies that could have been used to finance capital projects that would benefit the future generation are used to service existing debts.
We therefore reiterate our position that rather than acquiring more vague loans that does not impact on the lives of the citizens but of which the burden of repayment is shifted to both them and the future generation, government should put in place mechanisms to investigate and recover the several past failed loans, plug leakages which still abound in the system and ensure fiscal prudence; put in place policies and frameworks to activate the real sectors of the economy that have the capacity to engender growth and development such agriculture, manufacturing, mining, etc. Also, monies recovered from looters of public purse should be efficiently deployed to serve the need of the nation rather than borrowing.

Our Call:
1. We call on the Nigerian Parliament to show leadership and place moratorium on further borrowing by the country and order immediate investigation into the usage of the past borrowings. The report of the investigation should be made available to the public.
2. If it becomes absolutely necessary to borrow, details of the project to be executed with the borrowed fund be made public. The precise amount, interest rate and period of repayment should be published alongside in compliance with the provisions of the Fiscal Responsibility Act.
3. Monitoring/Progress reports of projects for which money was borrowed should be made available to the public regularly as stipulated by law.
4. Special audit of project implementations be carried out by the Debt Management Office in conjunction with the Fiscal Responsibility Commission and civil societies and findings made known to the Nigerian public who bear the burden of debt.
5. We also call on the Fiscal Responsibility Commission to stand up to its responsibility of effectively ensuring prudent utilization of all borrowed funds, particularly at state levels.