Social Development Integrated Centre, Social Action with the support of the MacArthur Foundation organized an agenda-setting and capacity development workshop for CSOs and Community agents in Akwa-Ibom state. As part of its movement to entrench transparency and accountability in the NDDC, the workshop focused on exerting community groups to develop strategies for engaging NDDC. The one-day capacity development workshop held in Uyo on July 13, 2021, was aimed at raising the consciousness of participants on the deficiencies of the commission and the need to develop strategies for engagements.

Speaking to participants at the event, the Programs Coordinator of Social Action, Isaac Botti decried the abysmal level of performance of the NDDC. Recounting past and present media reports of gross fiscal mismanagement and embezzlement of the commission, Botti noted that the NDDC has not only failed in its mandate of engendering development but is a major cause of underdevelopment in the Niger Delta regions. He further noted that the indifference of citizens and pressure groups, particularly civil society organizations, has contributed to the level of impunity the NDDC officials enjoy.

NDDC must be held accountable but as citizens groups, we must act. The time to act is now 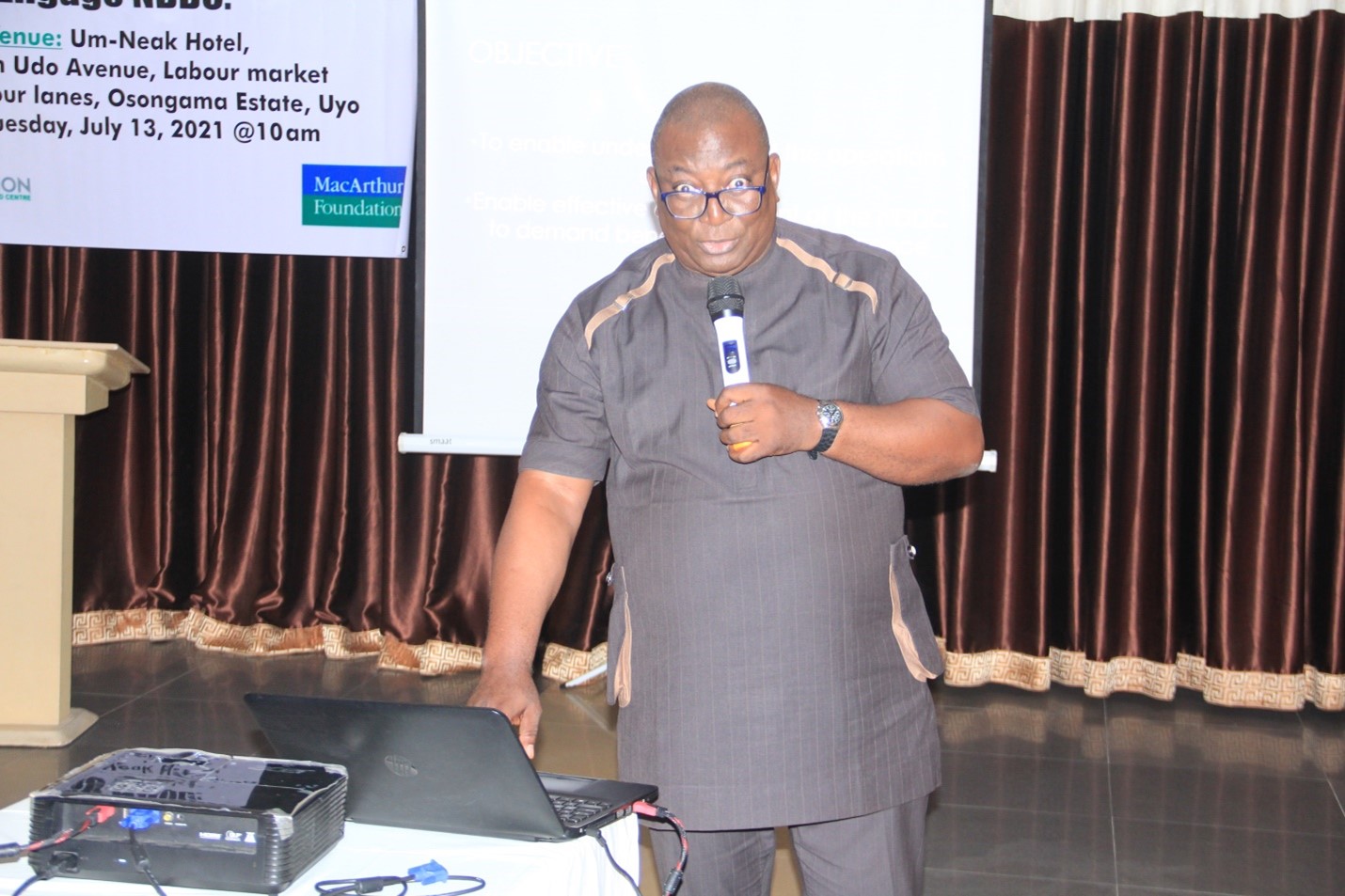 One Dr Harry Udoh explained the roles of NDDC in championing development agenda of the Niger Delta regions. In his address, Dr Udoh noted that the NDDC emerged from growing mass discontent of the adverse implications of ‘oil farming’ by multinationals in the nine Niger Delta states. As its major objective, the commission is expected to ensure that the oil-bearing communities enjoy commensurate development and that citizens do not bear the brunt of IOCs presence. The speaker however noted that the commission has failed in this regards, as its history has been marked with a tale of misappropriation of funds, poorly executed and abandoned projects and embezzlement of public funds. This he explained will continue to stall the development of the regions and until proper probity is carried out. He urged CSOs, PLWDs, women groups and all citizens groups present to take advantage of the social and conventional media to monitor the activities of  commission and engage  them on good service delivery.

He concluded that in other for the campaign for an accountable commission to be productive, communication messages must be strategic and in doing so groups first identify their audience, design messages to fit them and use the right channel of communication. 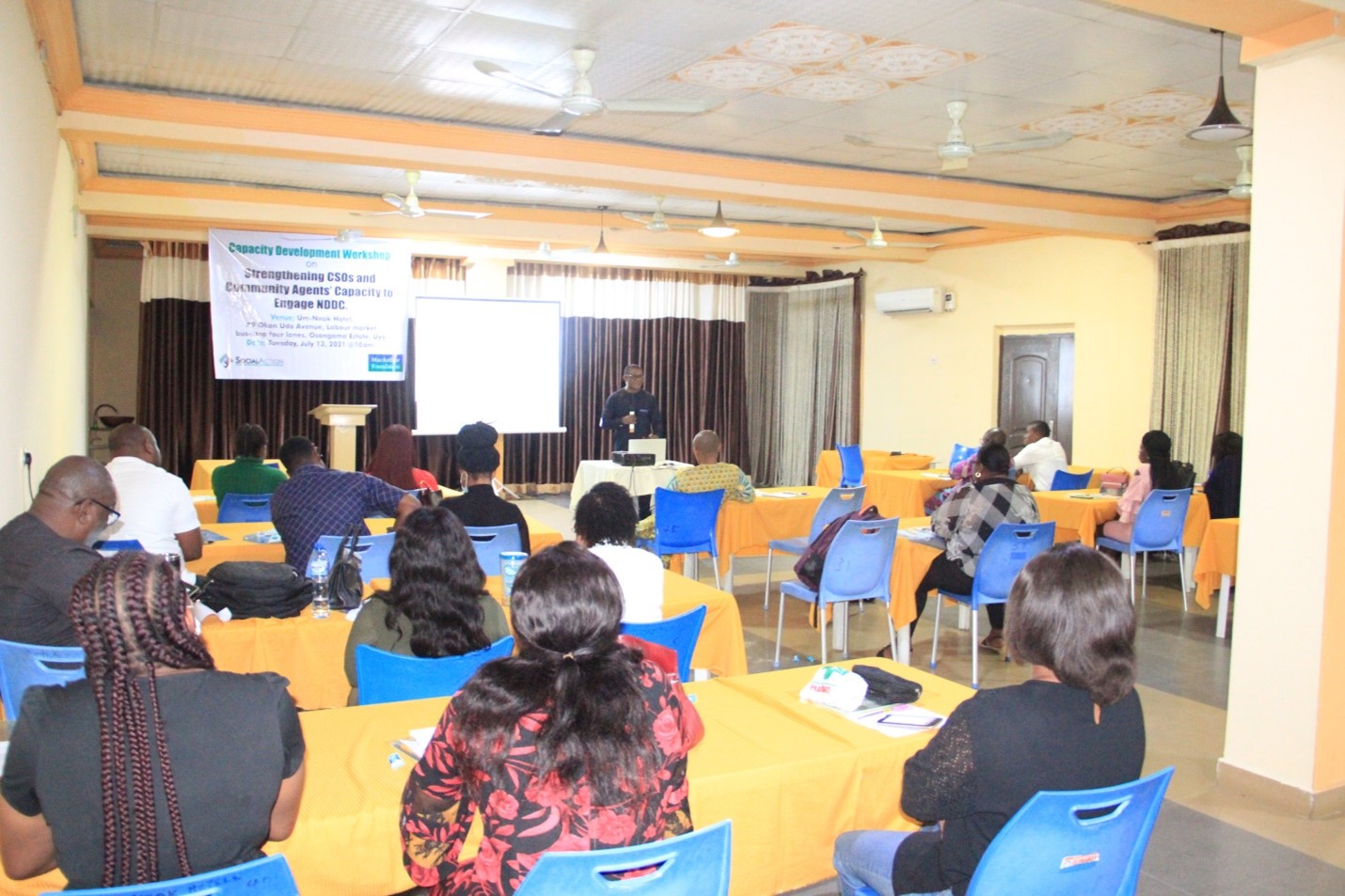 During a discourse tagged, “The Budget Process and Citizens Engagement”, Mr Botti noted that a lot of citizens have not seen the NDDC budget neither do they have an idea of the process of awarding contracts. This he stressed, makes it difficult to track and monitor projects. He, therefore, charged groups to send out FOI requests to the relevant ministries asking for the budget document. He maintained that once the document is made available, monitoring and evaluation could start and the NDDC would be made to be accountable to the people they are meant to serve.

Participants agreed with the speakers. Noting that the commission has been too secretive in their administration, groups present are determined to probe into the commission and ensure accountability is restored. During the group work session, agendas were set for engagements. Representatives of each group highlighted strategies for engagement.

Concluding the program, one of the facilitators, Ann Udonte reminded the participants of the need to mainstream gender and includes all social groups in developmental projects and budgeting