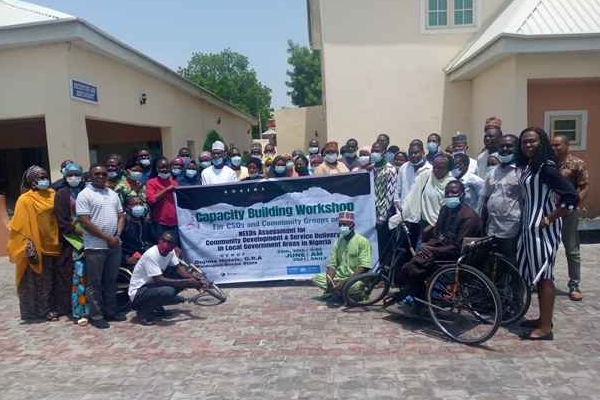 Independence and autonomy of the local government was again brought to the fore of grassroots citizens in Borno as women groups, people living with disabilities, civil society organizations, media and other social groups converged at a two-day capacity-building workshop organized by Social Development Integrated Centre, Social Action with the support of United Nations Development Funds, UNDEF.

The workshop, which took place at the state capital on the 29th and 30th June made to build citizens consciousness on the activities of local government, clamor for LG autonomy and ensure there is improved service delivery in their regions.

In his welcome address, Programs Coordinator of Social Action, Botti Isaac explained that the program is aimed at promoting accountability of the local government in the region. Considering the level of humanitarian crisis in the state, Mr. Botti noted that the LG receive funds which are meant to cater for the needs of the people. However, it appears the funds were underutilized. The two-day capacity-building workshop he explained would help stakeholders adopt strategies and approaches to engage the Local government and ensure it becomes more accountable to the people.

Speaking on Local government autonomy, the project lead, Mr. Prince Edegbuo called for the removal of section 8 of the 1999 constitution as amended and give room for an independent and autonomous local government. According to him, the local government has failed to function effectively because the state governments crimps down on it and until there is a clear-cut separation, no development can occur.
Mr Prince further encouraged stakeholders to advocate for a change in LG administrations. Stakeholders present were encouraged to carry out needs assessment and take advantage of any window of opportunity that presents itself to contribute meaningfully to any dialogue sessions organized by the state. CSOs as influencers must be ready to engage the local government and advocate for an inclusive and participatory budgeting process.

The workshop further called for proper election of public office holders into LG offices as opposed to the present appointment practice; disbandment of the state Independent Electoral commission, fairness of developmental process, a social inclusive budget and governance that is gender sensitive.

Stakeholders during the group sessions facilitated by Joy Ashalva and Mr Wuyo developed work plans in order to engage the local government. Majority of the participants agreed to demand for the 2020 LG budget, pay advocacy visits to LG secretariat, organize dialogue sections with LG representatives and sensitize other community groups. They further thanked the organizers of the event and promised to implement all the resolutions.

One of the participants, Mrs Elizabeth Dilibe, the Managing director of Hopeful Initiative, assured Social Action that advocacy activities would be carried out. In her view, the first step is to set the local government free from the state government so that they can be held more accountable.