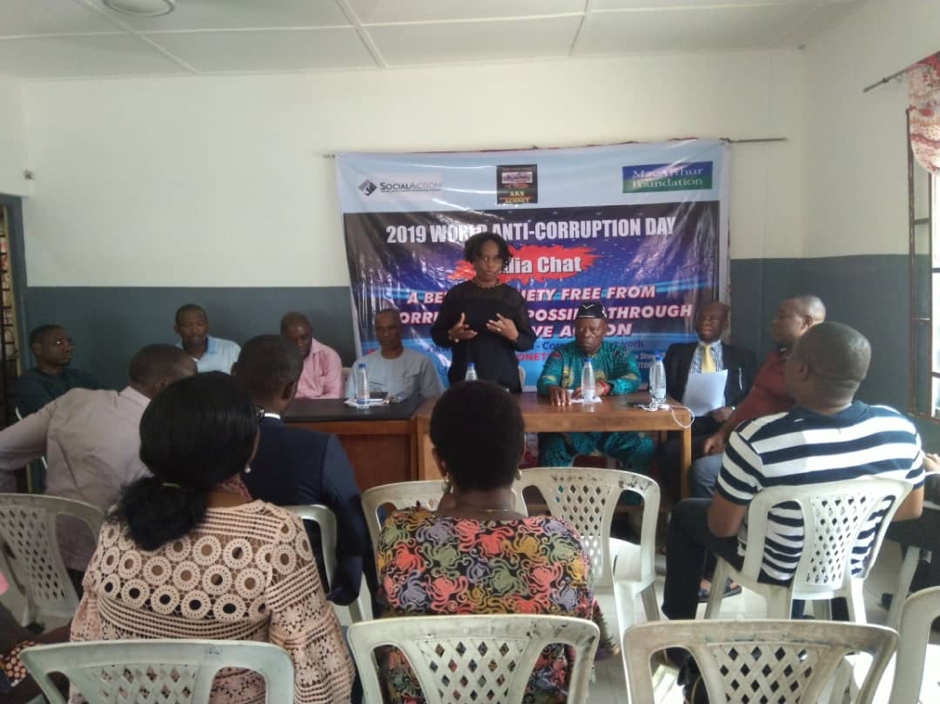 In Uyo the Anticorruption Network (ACONET) members joined the Uyo Zonal Office of the Economic and Financial Crimes Commission – EFCC on Monday, December 9, 2019 on a citywide walk to sensitize the public against the adverse impact of corruption on the country’s economy and especially the citizens. The 2019 Anticorruption Day street campaign therefore, sought to sound a clarion call on Nigerians to ‘Wipe out corruption totally!’

This according to the EFCC Uyo Zonal Head, Mr Garuba Dugum, is important because ‘any society or a nation that does not check corruption in the system is bound to fail in all ramification.’

In a related development, ACONET was also represented at the Independent Corrupt Practices and Related Offences Commission – ICPC events to mark the World Anti-Corruption Day, with the theme; “United Against Corruption”. 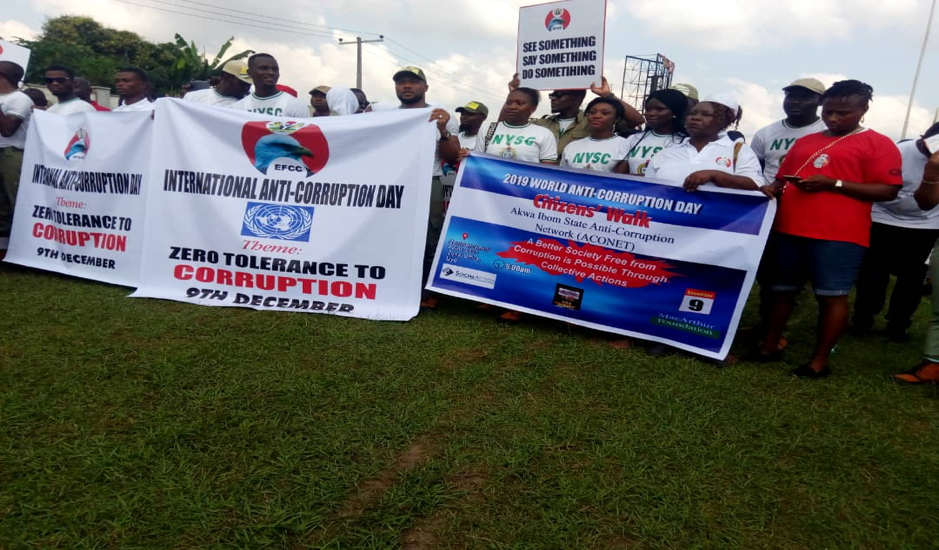 The State Commissioner, Mr. Sola Shodipo represented by the Director of the Legal Department, Barr. T. U. Kalu; stated that, the fight against corruption should not be limited to the ICPC alone, because the consequences transcend the commission and charged everyone to be on the alert.

Akwa Ibom Anti-Corruption Network (ACONET) organised a Media Chat as part of its activities to mark the international Anticorruption Day. The Media chat began with a brief introduction of invited stakeholders by the ACONET State Coordinator, Ann Udonte. She expressed her gratitude to all the stakeholders and representatives of the press present for honouring the invitation to the roundtable discourse. The media chart was focused on amplifying anticorruption efforts through collective actions. She emphasised that the Network will keep reaching out to the related MDAs in the state in partnership, knowing that the interest of the citizens ACONET work to serve must always come first. The State Coordinator expressed her delight in the partnership and collaborations she envisaged in the future of anti-corruption activities in the state and shared some success stories of ACONET in the fight against corruption in the state. The CLO Chairman, Comrade Franklyn Isong, in his goodwill message commended the Government for the Treasury Single Account and recommended special courts to try corrupt politicians because, according to him, the delay in convicting corrupt individuals kills the process. He also expressed dissatisfaction with the manners in which the projects of the state were carried out and went further to query the Ministry of Works on the poor state of roads in the state. Comrade Isong demanded that the state open up its portal to enable an effective and efficient tracking of budget; which he believed would afford the public the opportunity to make proper inputs on the plights and aspirations of people. He concluded with a charge to the media to wake up to their responsibilities.

Representative of the Joint Association of Persons Living with Disabilities (JONAPWD) – Mr. Ubong Udo Mr. Ubong Udo representing the Chairperson, JONAPWD Akwa Ibom State Chapter, stated that there is a strong link between corruption and the conditions of people living with disabilities. According to him, corruption is the major cause of high cases of disabilities in the country. So many preventable diseases are allowed to escalate because of poor management of the health institutions. Sharing the story of his disability, Mr. Udo said he became blind because the nurses and doctors on duty gave wrong diagnosis about a preventable glaucoma infection and he attributed this to the carelessness, irresponsibility and negligence on the part of Government. He also stated that some group of persons are using persons with disabilities wrongly, they make budgets for them without first evaluating their needs; they propose scholarships that do not get to any of them. He also queried the need of having special primary schools and not having Special Secondary Schools and Universities to cater for those with peculiar needs graduating from these schools.

In an interactive session, questions from media persons present were adequately addressed. Barrister Clifford Thomas, while giving the vote of thanks on behalf of the stakeholders, charged the Government of the day to be responsible and monitor activities of contractors. He concluded by appreciating the Network on behalf of the participants for conveying the dialogue and reiterated the commitment of all stakeholders, present, to the fight against corruption.