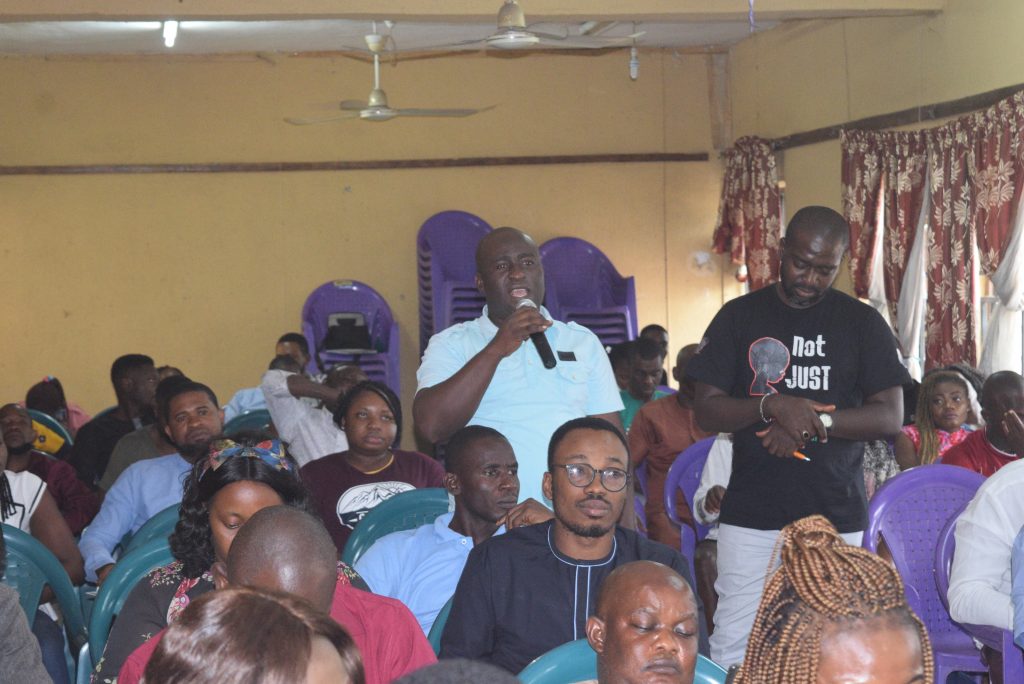 Every year civil society, community-based groups and concerned stakeholders meet at the Nigeria Social Action Camp to study and consider alternative theoretical positions, ideas and skills needed to serve as agents of positive change in various communities in the process of Nation building. The aim has always been to build solidarity for change through collective learning of alternative ideas to the dominant neo-liberal tendencies that currently dominate the Nigerian political space.

This year, the camp held at the Anglican Church Conference Centre, Owerri Imo State from the 12th -16th, November 2019.

The camp programme teed off with the opening ceremony where the Programme Officer, Arochukwu Paul Ogbonna Esq., welcomed all participants to the 2019 Social Action camp and reminded them of the ground rules for the camping. He reiterated that camp is for learning and encouraged everybody to participate actively in all activities designed for the programme.

While welcoming the participants to the camp, the Executive Director of Social Action, Dr. Isaac Asume Osuoka berated the political class for deliberately stunting development through corporate looting, over-bloated personnel and overhead bills to support and sustain their lavish lifestyle. In the address presented on his behalf by Peter Mazzi, he said the panacea to the dysfunction in what is experienced in Nigeria’s democracy today is building and strengthening grassroots citizen organizations, committed to principles of union democracy. He said it was most unfortunate that the voice of the press and the people have continually suffered shrinking space with policies of successive civilian leaders over the years. He then charged the participants to chat a new democratic roadmap with informed, energized, active advocates and agents of change poised to exert their constitutional rights and open up the democratic space for participation in the social and political scheme in Nigeria. 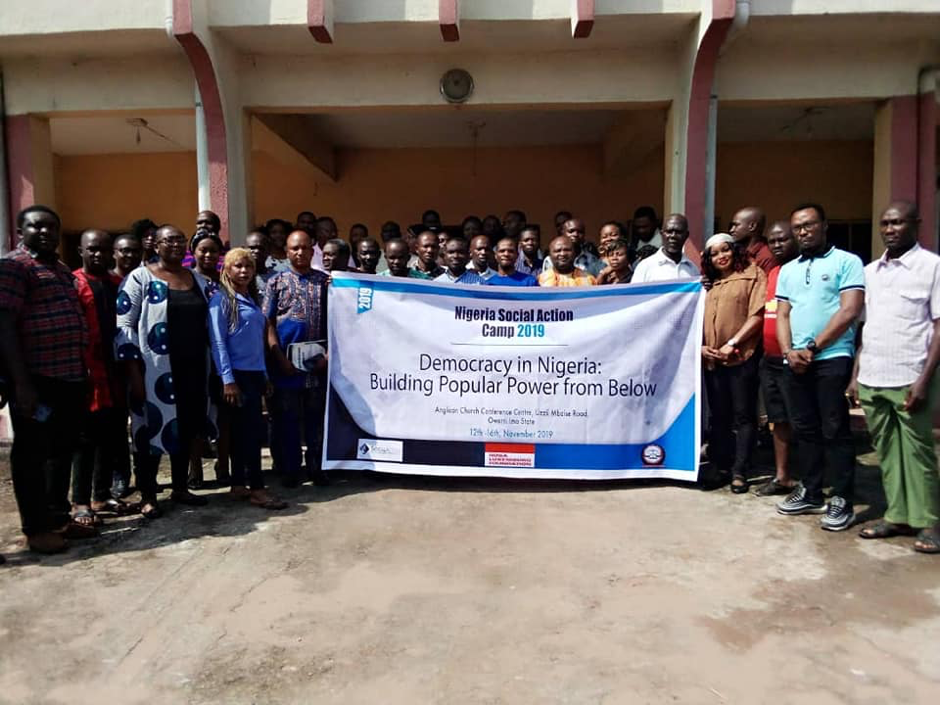 In his opening charge, Prof Andrew Efemini of the University of Port Harcourt lamented the poor state of mental and structural development in Nigeria and compared the situation of Nigeria to be akin to the state of nature where life is short, nasty and brutish. He maintained that Nigerians have not expressed themselves through acts of productivity but like apes in a state of nature, have continued to live on borrowed brains and innovations of citizens of other countries. He posited that popular power is the capacity to create popular consciousness and put in place, in a sustained manner, action plans for resisting maladministration and government tyranny and compelling government to become accountable. He concluded that It is important that as the people exercise popular power, they need to have a conception of the kind of society they want to enthrone. Only then can they make progress towards actualising shared ideology. 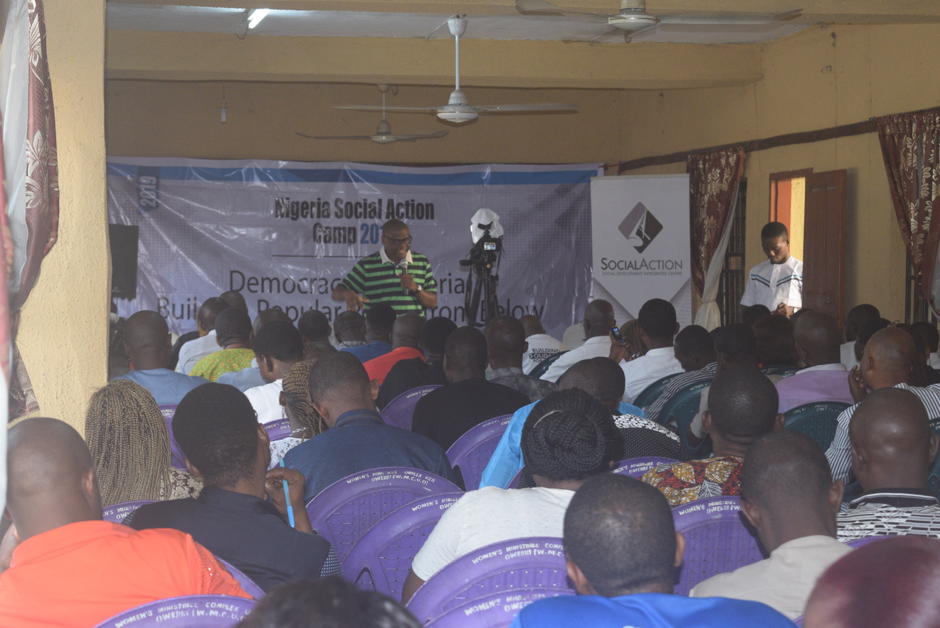 Figure 2.  Jaiye Gaskiya and a cross-section of participants in one of the sessions

Comrade Jaiye Gaskiya added his voice to the charge of the night. He talked about the need for Nigeria citizens to build popular power and develop an appropriate channel with which to give vent to their feelings. He commented on the uprising and different forms of the revolution being recorded in such counties as Bolivia, Hong Kong, Sudan, Algeria, Chile, South Africa. Quoting Mao, he stressed that where there is repression, resistance is bound to happen.

Barr Onyeisi Chiemeke welcomed participants to the 2019 camp and gave a background history of each of the group models and emphasized that the lives of these people, particularly someone like Robert Mugabe, have contributed to sustaining the argument of strong men versus strong institutions. He commented that in all over Europe, the strong men are taking over. This effect is spreading the world over and not even such myth as the rule of law is capable of checkmating the trend. He argued that since the law is not given by God but by men, one cannot really say that all men, including those that gave the law, are equal before the law – as contemplated by the doctrine of rule of law. One’s social circumstances determine how much he can access the law, especially in countries like Nigeria where one would always need to be represented by a lawyer while pursuing his or her legal rights; this is in contrast to what obtains in India where prisoners can write from a prison to the Magistrate covering the jurisdiction of the Prisons and the Magistrate in exercise of his episcopal jurisdiction, would order an investigation to be carried out on the alleged offence of the Prisoner. Where it is established that the offender is not guilty of the charges, the Magistrate orders his/her release.

Prof Nekabari Nna Johnson in his presentation suggested that elected officials focus their attentions exclusively on their own privileges to the detriment of the people. Thus, poverty has been deepened in Nigeria and democracy cannot be sustained in an environment of poverty, neither can weak democratic systems provide for socio-economic development. Poverty has also stripped the people of the capacity to hold the leaders accountable and the lack of accountability has made elected officials less responsive to the needs of the people. 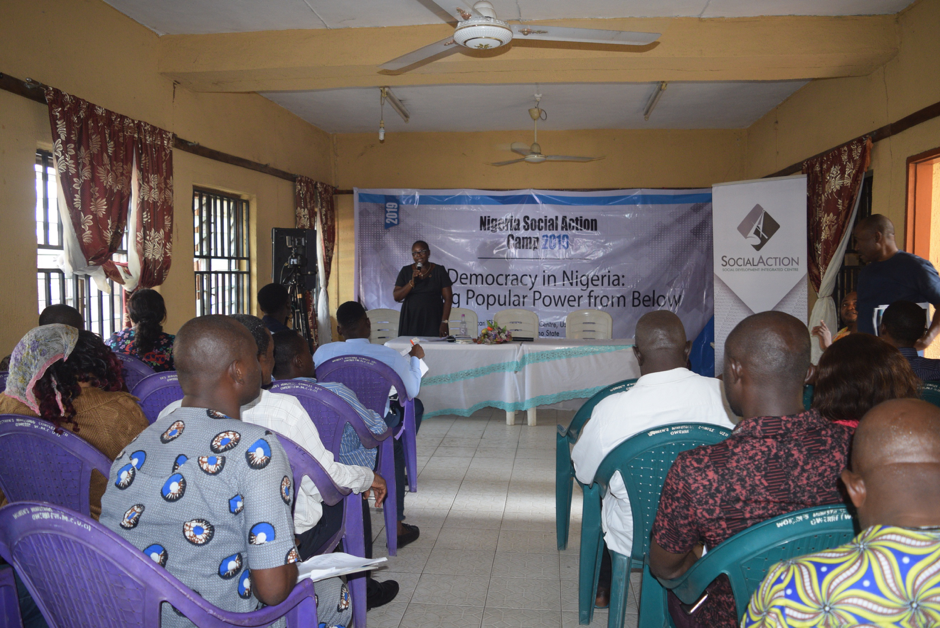 Figure 3. A Barr Bridget Anyafulu on  “Sexual Abuse and the consent of the Nigerian women”

In a presentation titled “Sexual Abuse and the consent of the Nigerian women” Barr (Mrs) Bridget gave the definition of sexual violence according to the World Health Organization (WHO) as: any sexual act, attempt to obtain a sexual act, unwarranted sexual comments or advances, or acts to traffic, or otherwise directed, against a person’s sexuality using coercion, by any person regardless of their relationship to the victim, in any setting, including but not limited to home and work.

She stated that sexual violence (which may involve even the male gender) can happen anywhere and is not only about penetration as in rape. It can include other forms of assault involving a sexual organ, coerced contact between the mouth and penis, vulva or anus. She encouraged participants to engage their respective representatives in the State Assemblies to domesticate the Violence Against Persons (VAP) bill which is already in operation in Abuja. The reason was that the VAP takes care of provisions and situations not envisaged by the Criminal Law.

A goodwill message was presented by Mrs Angela – on behalf of the West African Regional Representative of Rosa Luxumburg Foundation. She commended the resilient spirit of Nigerians amidst the difficulties in the country and Social Action for hosting an impactful and educative 2019 camp. She encouraged them to engage more female participants and Resource Persons, in future camping.

The camp program was embellished with educative film shows and documentaries, sporting activities, breakout discussion sessions and group presentations and capped with the traditional campfire.