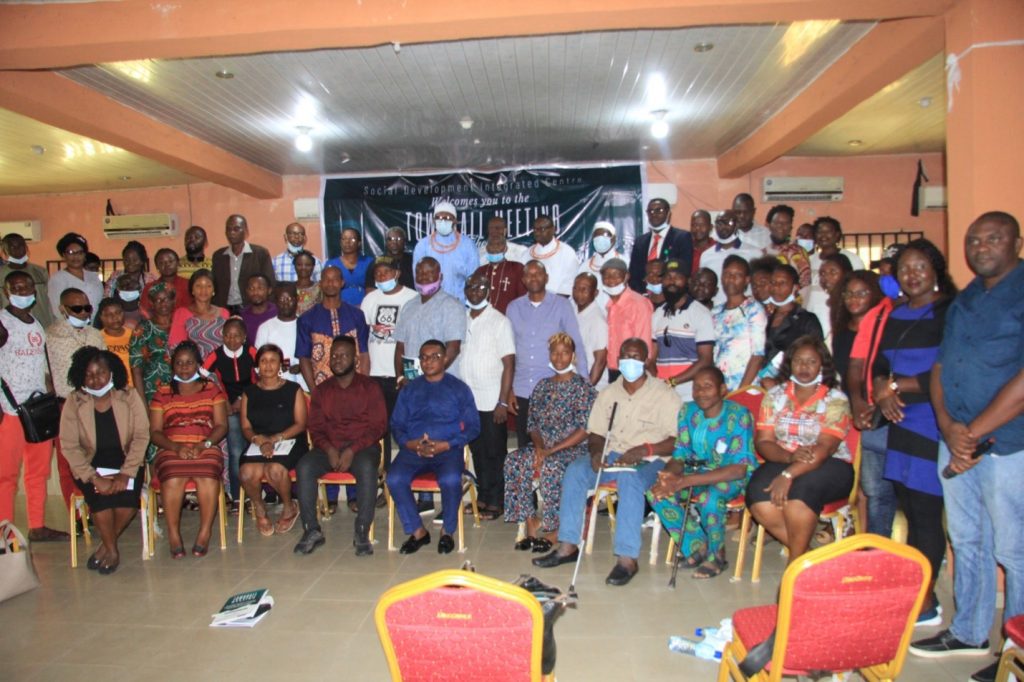 As part of the effort toward Strengthening Civic and Community Actions against Corruption in the Niger Delta Development Commission, NDDC”, under a project supported by the MacArthur Foundation, Social Action organized a town hall meeting in Benin City, the capital of Edo state to x-ray community approach to promoting accountability, inclusive and efficient service delivery by the NDDC. The town hall meeting was attended by community leaders from across the state, religious leaders, government officials from the Ministry of Niger Delta Affairs, women groups and members of the PWDs. It focused on strengthening citizens’ participation in the NDDC budgeting process and the implementation to ensure inclusive and effective service delivery across the region. The meeting also opened space for citizens and duty bearers to interact on how collaboration between community structure and NDDC could be enhanced such that projects implemented by NDDC reflect the yearnings of the people.

While setting the tone for the discussion, the Programmes Coordinator of Social Action, Isaac Botti in his opening remarks noted that the Niger Delta region has remained underdeveloped despite being the region where over N100 Trillion naira has accrued to the nation from oil extraction activities. He noted, sadly, that 21 years after the creation of the NDDC as an intervention agency to ameliorate the negative impact of oil exploration in the Niger Delta, the region is still living in a deplorable state of environmental, social and economic deprivation. He blamed the lacklustre performance of the NDDC on the lack of engagement by citizens and citizens’ groups with the Commission which has now created the culture of endemic corruption in the institution. He noted that citizens have the key role of independently over-sighting the activities of the NDDC to ensure that they deliver on services that would benefit all in the community. Isaac, therefore, charged participants at the meeting to take advantage of the occasion to come up with concrete strategies and ways to effectively engage NDDC for improved and efficient service delivery.

While delivering a presentation of “Budget as a veritable tool for effective service delivery; a community approach”, Isaac stressed the need for Niger Delta citizens to be part of the NDDC budget development process. He highlighted areas of windows of opportunities for citizens to engage in the budgeting process and participate in the implementation. Isaac noted that corruption thrives in an atmosphere of docility; that when citizens are not concerned with how the budget is developed, they are indirectly creating a breeding ground for corruption.

Panelists at the meeting lamented the level of corruption in the NDDC system. They noted, with regrets, how the government and the management of NDDC have deliberately marginalized the people in the process of delivery on essential public goods by concealing important fiscal documents such as the budget from the public. The panelists pointed out how some persons including people living with disabilities are mostly affected by the poor service delivery by the NDDC. Members of the PWDs and women groups present at the panel lamented the poor state of infrastructure and how it affects them. They, therefore, call for a collaborative approach- a working relationship between community people and NDDC to ensure inclusive and efficient service delivery.

In responding to both the presentation and the panel discussion, participants expressed their pleasure with and appreciated the opportunity to be invited to the meeting. They decried the process of building projects into the NDDC budget without consultation with the people the projects are meant to serve. They called on the government to make conscious plans to ensure that community leaders are carried along in their plans. They also urge traditional leaders present to do their best in advancing the interest of the people and ensuring that the people are carried along. Their recommendations also included the incorporation of persons with disabilities to be involved in the planning and budgeting process of the NDDC Projects, in line with global best practices. Finally, they warned against the use of NDDC for political patronage and called on the President to make the forensic audit report available to the public