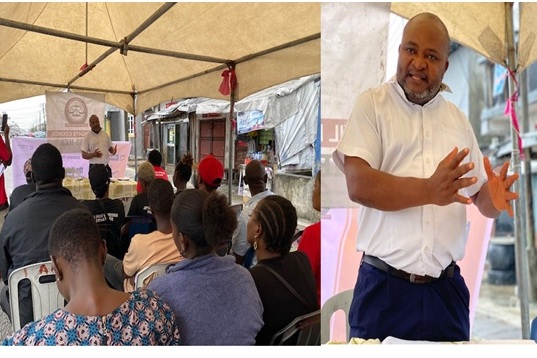 On the 28th and 30th of July, 2022, the Civil Rights Council held a public sensitization program on the rights of women and the girl child in the suburban and rural areas in Rivers State. The essence of the sensitization program, which was held at the Social Development Integrated Centre community office at 78 Uruala Street, Diobu, Port Harcourt was in response to the many cases of violations of women and girl child rights. These practices run foul of Nigerian legislations, including the Child’s Right Act, the Violence Against Person’s Act, the Criminal Code, the Penal Code and the Constitution of the Federal Republic of Nigeria as amended.

Speaking at the event, Comrade Arinze Akupue (Chairman, Rivers State Civil Rights Council) reminded the community of available legislations to further protect and reinforce their constitutional rights and therefore, encouraged them to take proactive actions as individuals and as a community to enforce those rights through the various institutions of state set up to handle right violations and the law courts whenever infractions occur. Comrade Akupue lamented the increasing cases of violence against women in our society as the number of deaths occurring, as a result, is on the increase in recent times. This, he further stated, is often promoted by a culture of silence and sustained by a patriarchal society that depicts women as second-class citizens or often treats both women and children as properties which have to stop with our collective advocacy and clamour for change.
In his opening statement, the program officer, Arochukwu Paul Ogbonna Esq. admonished the community people to use legal means to confront violations and see to it that individuals within the community who are serial offenders and violators of the law, especially in cases of child defilement and domestic violence are punished as a panacea to putting a stop to such menace. He stated that cases of violation of the rights of children, especially rape, child marriage, child labour, lack of access to education, child battering and assault and the use of children for begging and commercial sex work are an everyday occurrence in our society and must be stopped. This, he opined, could be achieved through our collective advocacy and campaign to save the weak and vulnerable in our society, especially as members of the Civil Rights Council.

In a related development, the Civil Rights Council units in Bori covering Eleme, Khana and Gokana Local Government Areas, on the 30th of July, 2022 also held a public sensitization program on the Electoral Act 2022. The sensitization program focused on what citizens should know which are innovations and improvements in the New Law. The sensitisation drive became necessary in the backdrop of the countdown to the 2023 general election and the need for the citizens, especially in the rural areas to seize the moment to prepare to make informed choices through the ballot.

The program which was held in Bori had community people from various villages in attendance. Speaking to attendees, the President, Bori Civil Rights Council, Comrade Dumka, noted that the activity is coming at a very auspicious time when political activities and politicians are about to start their campaigns. He maintained that knowledge of the principal law governing the electoral processes and transition program in Nigeria is vital to prevent citizens from falling prey to the manoeuvring and corruption that has characterized elections in Nigeria in years past. Furthermore, the guest lecturer Mr Frank Nornubari informed the participants that the law is meant to be observed by the citizens through enforcement and to ensure that those given responsibilities under the act carry it out. He then took participants through sections of the Electoral Act, 2022 that deal with Electoral offences.
The second section was taken by Mr Charles Obiora, who spoke on sections of the Electoral Act, 2022 that covers the conducts of political parties, before and after elections in Nigeria.
In his contribution to the discussion, the program officer, Arochukwu Paul Ogbonna Esq., maintained that it is only through the knowledge of the law and the practice of same can citizens hold political and state actors accountable and thus sanitize the political system. The sensitization program is among the series of activities which the Civil Rights Council intends to engage the citizens with henceforth until the end of the electioneering period in 2023.