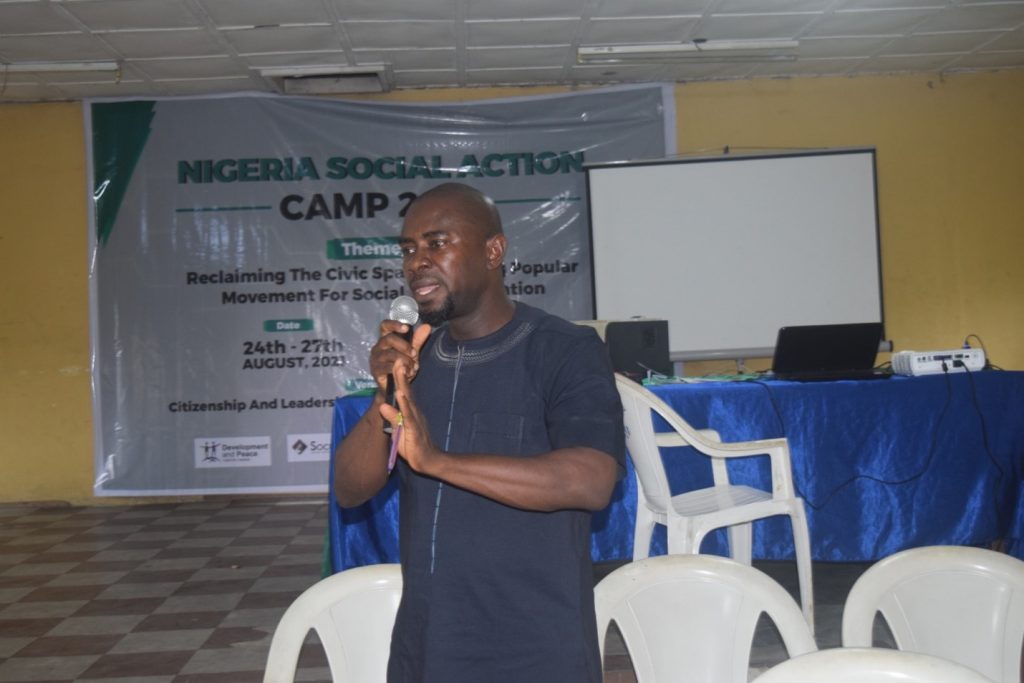 “The issue of human rights protection remains the cornerstone for proper existence of human race and their observance in a state encourages peace, civility and prosperity of human society.” Barrister Victor Njoku made the assertion as he gave a lecture at the 2021 Social Action Camp.

This discussion is essential to the fact a lot of human rights activists, CSOs and even innocent citizens face all manner of inhumane treatment at the hands of security agents. There have been several cases of unlawful and arbitrary killings by government and non-state actors, unlawful interference with the rights of peaceful assembly and freedom of association, serious restriction of free expression by the press and citizens on the conventional and new media spaces.

These detainees sometimes are locked up, tortured without trial while being kept incommunicado without access to their friends and families whereas the law requires an arresting office to make known the charges against an accused, take the accused to the police station for processing within a reasonable time and allow the suspect to obtain counsel and post bail. More so, the security agents who are supposed to make the citizens feel safe with their presence now use nonlethal tactics such as firing teargas, batons, before employing the use of force in dealing with those they are meant to protect.

Also, another area of interest is the Police Act that makes provision for the protection of the human right of suspects in police custody. Nweke asserted that the police is bound to observe these rights while exercising their statutory function of arrest, investigation and prosecution and a violation could give the citizen the right to sue the police. While also listing these rights, he told attendees that the knowledge of these rights is like a lamp that will guide them not just during activism, but also in serving as watchdogs to ensure that security agents obey the provisions made by the law in course of discharging their duties.

He further noted that the Act also kicks against torture and describes torture as cruel, inhuman, degrading treatment which causes pain, exhaustion, disability or dysfunction of one or more body parts These treatments if meted out to detainees are punishable under law as the officer, upon conviction, is liable to imprisonment for a term not exceeding twenty five years.

Sadly, the Act which he described as a “bold step” taken by the National Assembly to enhance the protection of human rights is still being violated by security agents as citizens still make confessions under duress for fear of losing their lives. However, these misappropriations that are gradually becoming a norm can be abated when citizens are abreast with the right knowledge and act accordingly. He, therefore, recommended that training such as the ones organized by Social Action be carried out more regularly equip CSO and active citizens with requisite knowledge and tools to defend themselves against the brute and inhumane treatment being meted by the security agents on innocent gullible citizens