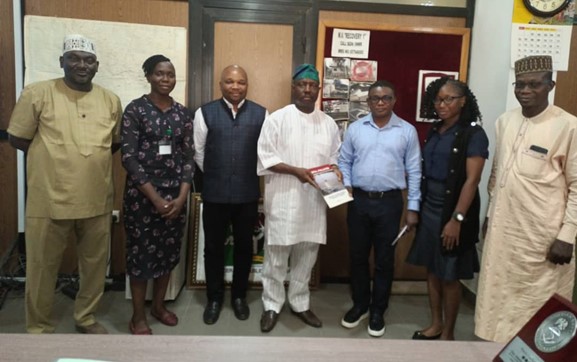 Social Action paid an advocacy visit to the office of the Director General, National Oil Spill Detection Response Agency (NOSDRA) in Abuja on Tuesday, 29th November 2022, as part of efforts to strengthen collaboration with NOSDRA in relevant areas of concern.

The team led by the Policy Advisor of Social Action, Dr Uche Igwe, seeks to consolidate ongoing partnerships in the training of NOSDRA’s staff and members of communities in the sites of oil and gas production and in amplifying the work of the agency in the Niger Delta region and Nigeria at large. Already, Social Action and NOSDRA have collaborated to organise training workshops in the Niger Delta.

Speaking to welcome the delegates, the Director General of NOSDRA, Mr Idris O. Musa, commended Social Action for their efforts in building synergy and advocating for transparency in governance. He recounted similar partnerships with Social Action and the many benefits that resulted from it. According to him, NOSDRA is always open to strategic partnership and collaboration with well-meaning bodies like Social Action.

Mr Idris further decried the environmental state of the Niger Delta region, which has worsened over the past years. In his view, the host communities contribute to the oil spills and contamination of the environment just as much as the multi-nationals involved in extractive activities. He lamented how oil bunkering activities, oil thefts, and illegal refineries have destroyed several mangrove areas of the region and how the people continue to misunderstand NOSDRA. Despite NOSDRA’s efforts in monitoring oil spills and sensitizing the people to the dangers of illegal refineries, some communities view the agency as “attorneys” of multinationals. The multinationals on the other hand tend to have a biased view of the agency and most times refuse to pay for damages caused by their extraction activities even when they are sanctioned by NOSDRA. Hence, NOSDRA has decided to push for an amendment of its agency Act to enable it to enforce the prosecution of erring multinationals on account of damages done to host communities. The Director General implored the civil society organizations operating in the Niger Delta to join forces to push for the amendment of the NOSDRA Act.

Responding, the programmes coordinator of Social Action, Mr Botti Isaac, said Social Action would be happy to bridge the communication gap between NOSDRA and the host communities through a sensitization exercise. Social Action also promised to return with a proposition paper on strategic areas or partnership with the agency.