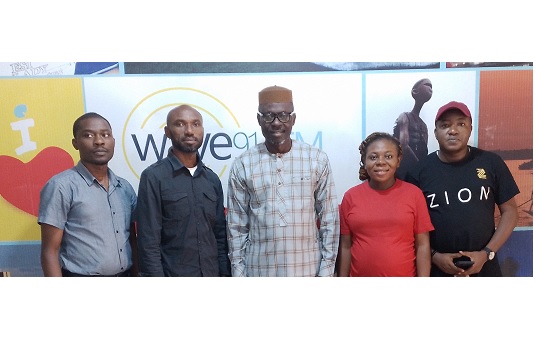 The management of Wave FM invited Social Action for a courtesy visit on the 23rd of June, 2022, at their Port Harcourt office. The General Manager of the Station, Mr. Rex Igiri, who presided over the meeting, received the representatives of Social Action alongside his colleagues Mr. Adetola Adeasake, the Head of Administration and Accounts and Mr. Excel Uwaezuoke, the Head of Programmes. He thanked the Social Action team, represented by Mr. Peter Mazzi and Peace Agbo, for honouring the invitation and expressed his delight for the support the station has always received from Social Action via different programs and collaboration. According to him, the main purpose of the invite was to say “thank you and express their appreciation” for past and present support by the organization while looking forward to working with them anytime the opportunity present itself.

He further briefed Social Action Team on the next edition of the quarterly programme “Walk for Safety, Walk for Security”, tagged “Walk for Food Security.” Though the program is still in the planning stage and scheduled to hold in October, he felt the need to get meaningful input of stakeholders like Social Action for a successful outing. Mr Igiri noted the theme was specifically chosen to draw attention to one of the biggest challenges facing the country at the moment with the view to galvanizing support to address it.
Speaking on-behalf of Social Action, the Communications Coordinator, Mr. Peter Mazzi applauded the station for reaching out to Social Action and acknowledging the works of NGOs and Civil Society Organization in promoting social change. He stressed that in order to make any meaningful social and economic development, the government, CSOs, the Media and the citizens must play their parts. But he added that the citizens must take the lead as they have the critical mass to drive the needed policy change from the duty bearers. He also assured the General Manager that Social Action would continue to give its unflinching support to programs targeted at making positive impact to the best of available resources.