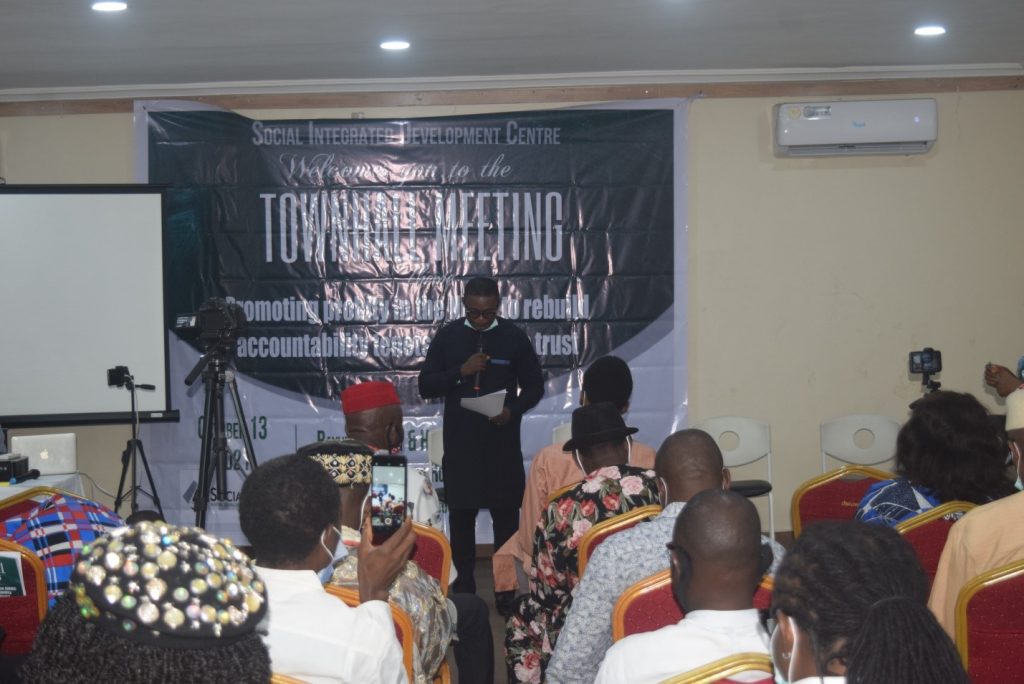 At the Town Hall Meeting held in Port Harcourt, titled “Promoting Probity in the NDDC to Rebuild Accountability Tenet and Public Trust”, organized by Social Action with support from the MacArthur Foundation, citizens of the region decried the lukewarm attitude of the federal government with regard to the forensic audit. They expressed disappointment over what they perceived as deliberate efforts to protect cronies and politically exposed persons who have been indicted by the forensic report. They noted that there is no possible explanation for the delay in making the forensic report public except for possible cover-up or editing of the report. They further lamented the deplorable state of infrastructure across the region, noting that NDDC has failed to meet this massive infrastructural gap. They, therefore, call for an immediate investigation into the alleged 12,000 abandoned projects and contracts. That they should be held accountable for the trillions wasted on those projects.

While welcoming the participants on behalf of the organizers, Programmes Coordinator of Social Action Mr Botti Isaac explained the need for CSOs, NGOs and the citizens of the Niger Delta region to demand accountability in the NDDC. He noted that in view of all the recent revelations both from the Senate Special report and the forensic audit report, there is no better time for citizens to demand accountability from NDDC than now. He posited that the occasion of the forensic audit has presented the opportunity for citizens to consistently interrogate the activities of NDDC and monitor its fiscal processes to be able to call them to account. He emphasized that the purpose of the meeting is to galvanize citizens voice around the debate of how to reposition NDDC for efficiency; rally the Niger delta citizens to put pressure on the government to act decisively on the forensic audit report and unanimously agree on the necessary steps to be taken to put an end to these misappropriations and the endemic corruption in NDDC.
The Executive Director of We The People, Ken Henshaw noted that the malfeasance going on in the NDDC did not start today, it has been a vicious circle. “The commission is being used to settle militants, reward friends, compensate allies and settle community tension” asserted Ken Henshaw, the Executive Director of We The People during his presentation on the topic “Promoting Probity and Accountability in NDDC- building Public Trust.” He lamented the fact that the world is gradually moving away from fossil fuel and as oil fizzles out, the region will be left with environmental damages caused by years of oil exploration and no finance to fix the damages done. So now is the time to take action to fix the Niger Delta. He emphasizes the need to demand the publication of the forensic as it will help promote engagement that will restore NDDC to its best form. 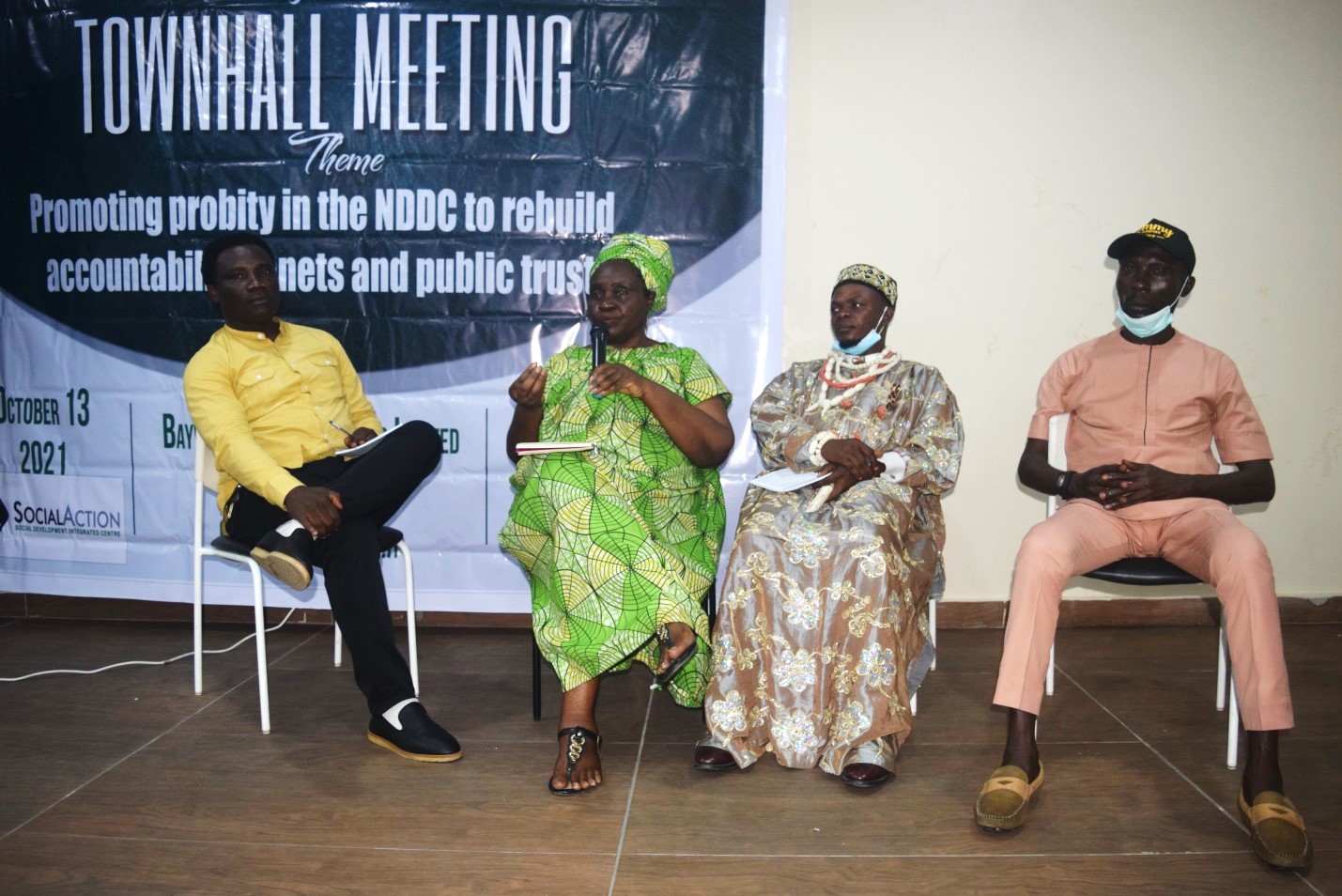 Panelists during the town hall meeting

Panel sessions that discussed the Role of CSOs in pushing for Probity in the NDDC and How the NDDC can be repositioned for effective service delivery in view of the Forensic Audit Report” highlighted some fundamental setbacks that the inefficiency of the NDDC has caused the region and how it has further impoverish the people of the region. Comrade Celestine Akpobari, therefore, urged that “Let us redefine our purpose”. He asserted that public sensitization of the activities of the NDDC is important as the people need to understand the purpose of their involvement and how it can help to reposition the commission for effective delivery. Comrade Bonny Akaeze and Flora Asieri of SDN also pointed out the need for CSOs to build coalitions and equip themselves with the right knowledge as they strategically employ measures to confront the issues in the NDDC. According to the panelists, Civil Societies are the watchdogs and must devise means of working with community members while leveraging on technology which is the new frontier for carrying out advocacy.
More so, the town hall meeting was able to strike a balance as the community heads/traditional rulers were able to address NDDC related issues not just as attendees but as part of the panelists who aired their views on the current impasse in the NDDC. Chief Magnus Edooh, head of a community in Rivers state during his speech noted the need to integrate the traditional institution such as the traditional rulers into the campaign for accountability in NDDC since they are the closest to the people and can speak the mind of the people. The other panelist who spoke further was Chief Constance Meju and Comrade General Tommie, a former Niger Delta agitator x-ray some of the drivers of corruption in NDDC. They noted the extreme level of secrecy in the commission; non-availability of its budgets and poor procurement practices. Both panelist who have worked with communities handling grass-root projects emphasized the need for a monitoring system to be created and communal needs put above individual interest. 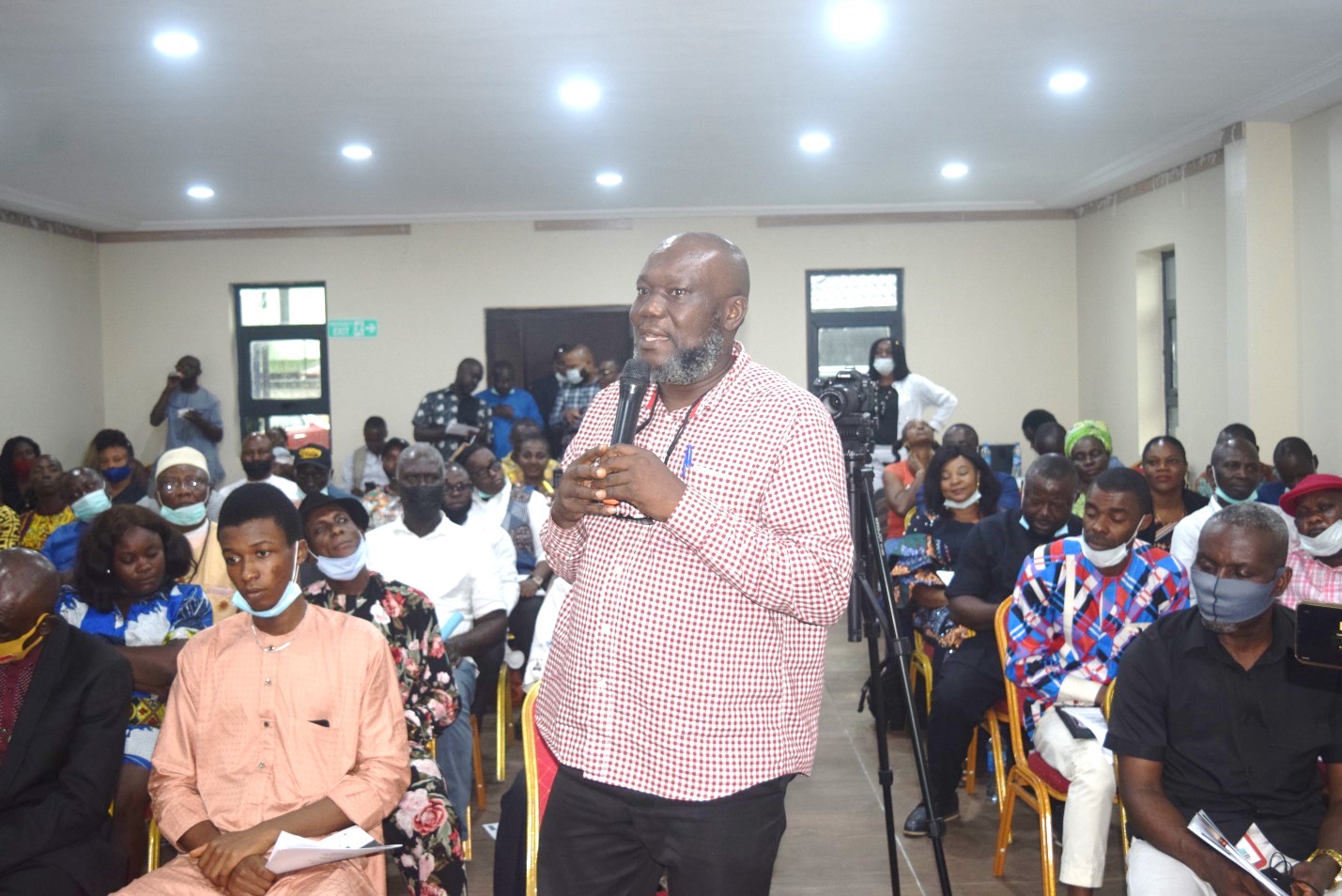 Cross-section of attendees at the town hall meeting

Attendees who were very pleased with the organizers also stressed the need to act at once so that the purpose of the call will not be futile. Questions were raised with participants pushing for concrete actions that will help sanitize NDDC. At the end of the meeting, a draft communique was read and the following positions were reached: