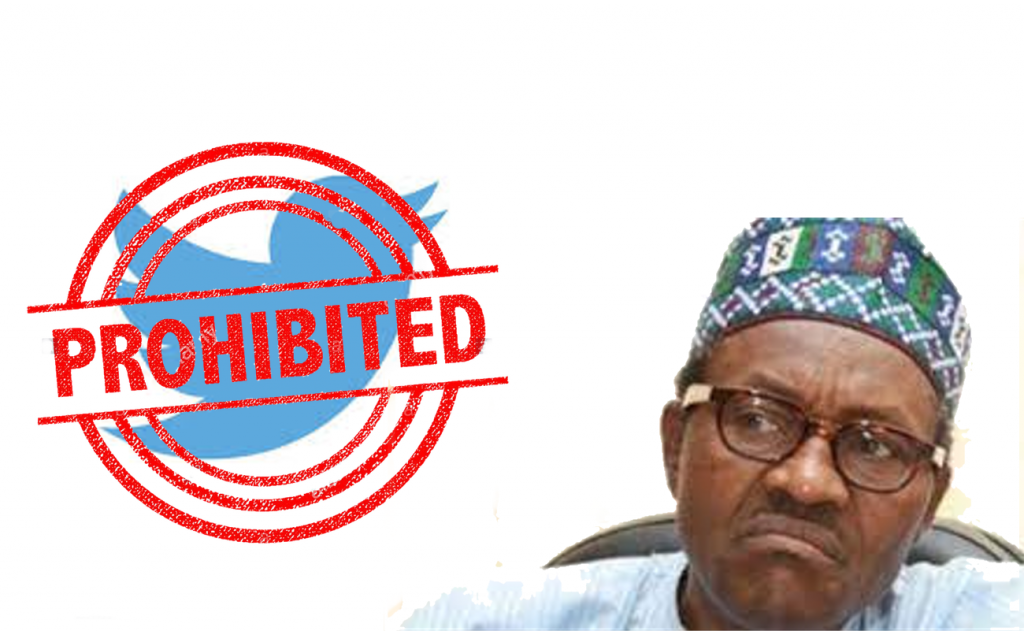 It is sad to note that the Nigerian state appeared to have entrenched autocratic style of leadership. The Buhari led administration continues to prove that it has no reserve for who and whatever questions its authority. This has been evident in its policies aimed at shrinking the civic space and silencing popular voices against dictatorial and non-democratic leadership and bad governance.

It would be recalled that Twitter had deleted a tweet by the President which violated its “abusive behaviour” and suspended his account for 12 hours. The controversial tweet by the President was seen as a direct affront on Nigerians and a threat to a very dissent voice in the country. The tweet referred to the Nigerian Civil War and to treating “those misbehaving today” in the “language they will understand”. Thousands of Nigerians had reacted angrily to the tweet spurring the delete of it.

Displaying an unending level of impunity, the Government on June 4 announced the suspension of the micro-blogging platform. The Minister of Information and Culture, Lai Mohammed in a statement accused Twitter of undermining Nigeria’s corporate existence with its “double standards”.

Stakeholders in the civil right community view this move by the federal government as a deliberate attempt to gag the masses and muzzle free expression which has potentially devastating implications for democracy and the civic space.

Ironically, the existence of Nigeria is threatened by the improvidence of the present administration. The Government has not only failed to be pro-active in tackling insecurity challenges and unemployment among others but has decided to remain silent. Unemployment has risen above 33%, food inflation stands at about 23.%  and the government grappled with a public debt stock of over N32 trillion. They seem to have ignored these weightier empirical indices but are perturbed with the action of Jack Dorsey which they felt hurt the  ego of the President.

The agitation for secession by groups is threatening to tear the country yet the President unscrupulously utters instigating words targeted at a group and expected to get away with it.

Social media users in Nigeria and Diaspora continue to express their disgust in governance. The social platforms offer Nigerians opportunities to connect in form of tweet and grow their business. Twitter, like many other social media has provided more job opportunities to youths than the government has ever considered. Yet the government is determined to stop its usage in the country.

Social Action frowns at the stringent conditions set by the government on Wednesday for the release of the ban. Asking a global micro-blogging platform to be registered under CAC and licensed by the NBC is not only illogical but a fight with technology. The terms and conditions offered for the lifting of the suspension on Twitter is nothing but a deliberate attempt to shut down a viable source of revenue of Nigerians and disable freedom of speech.

As social actors, we do not support the ban or the threat by the Attorney general to prosecute anyone who try to circumvent the Twitter ban. This is in conflict with Section 36(12) of the 1999 constitution which clearly states that for a person to be arrested, detained or prosecuted for a criminal offence,” there must be a written law”. This provision makes it impossible for the government to carry out this threat on the masses. Any action contrary to the provision of the constitution, would define this government as fully-fledged authoritarian and would declare war on the civic space.

In line with Article 19 of UN declaration of Human Rights, Social Action calls on the Federal Government, to lift the ban on twitter. Nigerians must be allowed to “receive and impart information and ideas through any media and regardless of frontiers”.

As Nigeria marks another year of democratic rule, we urge the federal government to reconsider their actions and lift the ban on twitter. They should channel their powers instead on addressing salient issues in the country like the spate of insecurity and providing job opportunities for the youths.

Until our voices are heard, we won’t stop!