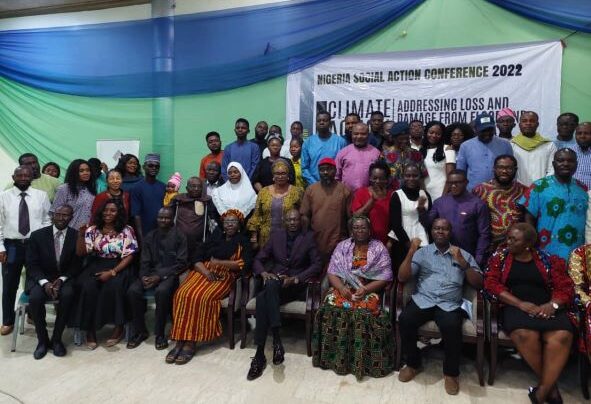 With communities and countries around the world experiencing the severe impacts of climate change, the Nigeria Social Action Conference 2022 served as a platform to promote dialogue around advancing local solutions to addressing the Nigeria climate crisis through collective actions. The Conference brought together climate activists, civil society organizations, government officials, parliamentarians, and academia to chart the ways and options for strengthening government policies and responses to the climate crisis in Nigeria. Coming at a period when Nigeria is reeling from unprecedented flooding that resulted in massive destruction of properties and livelihoods, and the recently concluded 27th Conference of Parties of the United Nations Framework Convention on Climate Change, the Nigeria Social Action Conference 2022 promoted awareness about the need for Nigerians to examine our national and sub-national responses to loss and damage, as well as adaptation to climate change.

The Acting Executive Director of Social Action, Anino Arsekurubu, made the charge in a welcome address at the Nigeria Social Action Conference 2022 which was held at Rockview Hotel Royale, Abuja on Monday 5 December 2022. Ms Atsekurubu stressed the need for state and non-state actors to work together to actualize national commitments in the mitigation and adaptation of loss and damage. According to her, the flooding situation in Nigeria and other countries is a clear manifestation of inadequate government and social mechanisms to combat the endemic impact of climate change, as several lives and properties were lost to the floods, which also displaced about .3 Million Nigerians.

Angela Odah from Rosa Luxemburg Foundation, in her goodwill message, commended all involved in the organization of the conference as well as all who have taken the time to attend the event. She urged attendees to engage in the conference, which is apt, given the devastating effect of the recent flood in the country.

David Okafor, who represented the Director General of the Nigerian Meteorological Agency (NiMET), commended Social Action for the event and encouraged all to pay attention to the event as it was not one for celebration but deliberation on how to address the damage by flood and drought in Nigeria.

Timothy Ogbotobo, a representative from the House Committee on Human Rights in the National Assembly of Nigeria, in his goodwill message, noted that climate change is not only a local but also a global issue. Hence, immediate solutions must be sought to prevent further devastating damages. He thanked the organizers for inviting the National Assembly because lawmakers must be involved in changing the narrative and ensuring climate justice for the country.

Honourable Abdulmumin Abdulsalam, the Senior Legislative Aide on Environment, Climate Change, and Disaster of the Senate, called for synergy of purpose from CSOs and the Government on the issue of climate justice. As Nigerians prepare for the elections, gubernatorial candidates must be asked about their plans for addressing climate change challenges in the country.

According to Barrister Chima Williams, Nigeria has all it takes to address the issue of the climate crisis. Sadly, most of our environmental challenges are caused by the activity and inactivity of the citizenry and the inability of the Government to come up with concrete climate laws and implement them for the benefit of the people. Barrister Williams charged Nigerians to speak up about the damages done to their environment. He urged CSOs and media players to amplify the voices of those at the grassroots and come up with mitigation plans on how these individuals can survive climate change while compelling the government to do the needful. He further charged the Federal Ministry of Environment to collaborate properly with NiMET, NEMA, and the Ministry of Humanitarian Affairs to address climate change challenges in the country. Rather than focusing on palliatives, the government should implement lasting solutions to floods and drought damaging the country.

Kolawole Banwo, Programs Director at Water Aid presented a paper on “Climate Change and Flooding Disaster: Evaluating the Loss and Damage to Communities”. According to him, addressing loss and damage in Nigeria requires a high-level political commitment and long-term development planning with long-term disaster management. He added that the plan should be built around homegrown capacity and resources, innovation, and place a premium on human rights to life and community rights to existence. He also urged the government and representatives of the National Assembly of Nigeria to carry out regular evaluations of loss and damage from flood and drought in Nigeria.

Madam Faith Nwadishi, Executive Director of the Centre for Transparency Advocacy, emphasized the need for Climate Action discussion to be contextualized and consider the vulnerable as they are at the most risk in mitigating crises resulting from climate action.

Ambassador Onoja called for a multi-dimensional approach to addressing the climate crisis. He urged the government to consider climate SMART policies, which must be implemented in time and ensure members of the community are induced into governance.

Mr. Gerald Esemonu, Executive Director of Environmental Friendly Initiative admonished stakeholders to focus on education and sensitization as this will raise awareness of people on the climate action crisis. He suggested using the National Youth Service Corps (NYSC) scheme to blow the trumpet of the Climate crisis ravaging the world today. NYSC Corps members should be trained and mobilized to sensitize members of the grassroots on these issues.

Mr. Bala Rufai, a representative of the Department of Climate Change, Federal Ministry of Environment, explained the role of the department in carrying out vulnerability mapping. According to him, this mapping is a measure to address loss and damage resulting from climate change in Nigeria.

Summary of the Contributions by Panelists

Comrade Hauwa Mustapha suggested that Nigerians should track the root causes of the climate crisis as it is a global problem. We must be careful while seeking local solutions to a global problem. All must take critical actions to stop the burning of fossil fuels. The government should transform ecological funds into loss and damage funds which must be managed by representatives of the people who have been made vulnerable due to the climate crisis.

Mr. Daniel Okafor called for synergy between Civil Society Organizations and NiMET to educate the masses on impending climate actions. According to Mr. Okafor, NiMET does a lot of forecasting about climate change and actions. These messages have to be simplified and taken to the masses in the language they understand. For this to happen, CSOs must be involved.

In her contribution, Dr Priscilla Achakpa emphasised the need for language simplicity. In her view, CSOs and the government must simplify the terms ‘climate action’ and ‘climate crisis’ so that communities would understand the implications of some of their activities that impact negatively on the environment.

She also suggested the inclusion of CSOs in the Climate Change Council for the effectiveness of purpose and mandate. Dr Achakpa called for the engagement of policies on climate change, adding that to address the issue of climate, we need to move from the national to the sub-national, engage and build the capacity of leaders at each level for change.

According to Comrade Jaye Gaski, the biggest challenge in addressing loss and damage in Nigeria is the distance between the government and the people. Hence, the government must look for a way to build the trust of the people. They must be ready to collaborate if this menace will be addressed.

At the end of the conference, participants unanimously agreed that the climate change crisis in Nigeria is a national emergency and all are involved in mitigating this menace.